But the full wet tyre on is the only compound to be on now, with Esteban Ocon now fastest for Renault.

And it looks like more rain has arrived! In trouble in the bottom five are Charles Leclerc, Romain Grosjean, Pieree Gasly, George Russell and Nicholas Latifi.

Valltteri Bottas is fastest with a 2.07.001, I expect those times to come down at some point but those slow laps show you just how they are tip-toeing around the track – it’s about 40 seconds down on Juan Pablo Montoya’s lap record.

Most of them are on the intermediate tyre, including Max Verstappen who has already spun on his outlap. He of course says there is no grip. The first spin of many I’m sure.

With rain in the air but not quite here yet, many of the drivers instantly leave the garage to set a lap-time.

‘It’s S*** with a capital S!’: Lewis Hamilton blasts Turkish Grand Prix track, branding it ‘terrifying’ and like an ‘ice rink’ after limping to fourth in Friday practice in Istanbul

FINAL PRACTICE RECAP: Lewis Hamilton FAILS to set a time as Max Verstappen goes quickest in final practice for the Turkish Grand Prix… but once again session is marred by low grip track and heavy rain

Madness around final practice… much like Friday’s sessions really. No grip, loads of rain, drivers struggling everywhere… I like it!

Then you have come to the right place! Wet conditions, ice-like levels of grip on the track, all the drivers complaining.

This is set to be an exciting afternoon as I welcome you to live qualifying for the Turkish Grand Prix. 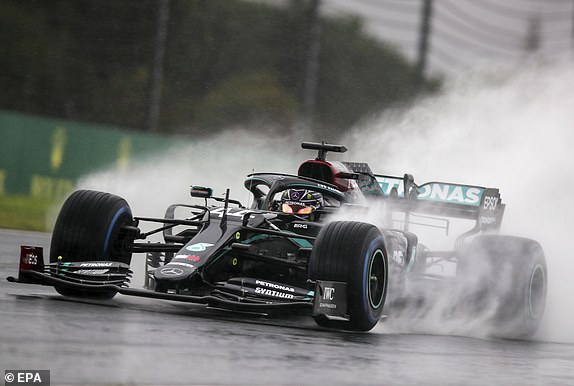 The battle for pole position is set to be one of the most unpredictable of the season at the Turkish Grand Prix on a weekend Lewis Hamilton hopes to match Michael Schumacher’s seven world titles.

Hamilton only needs to finish in front of Mercedes team-mate Valtteri Bottas to land the championship with three races left but is prepared for a very tough qualifying session.

But with many drivers including the Brit struggling on the wet and newly resurfaced circuit, it is set to produce one of the most jumbled grids of the season.