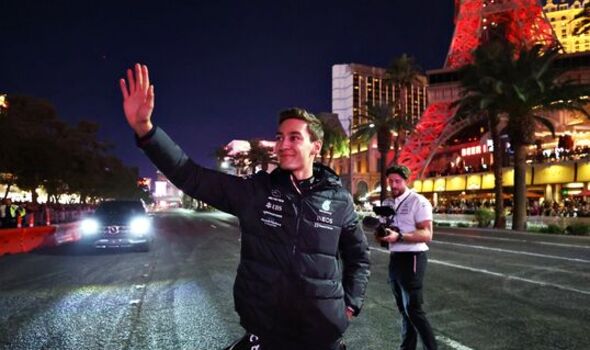 Mercedes ace George Russell admits that having an F1 race in Las Vegas is ‘super exciting’ but expressed concern about the lack of challenges on offer for drivers. The Grad Prix is set take place on a 6.1-kimometre course which includes 17 turns, a high-speed cornering sequence, a single chicane section and a two-kilometre section down the famous strip.

The night-time race is set to take place on the weekend of November 16-18 and could be the most expensive on the F1 circuit for fans. The most economic ticket for all three days starts at £440 for standing room via general admission, and the same ticket with a grandstand seat means parting ways with £1,750.

Despite the glitz and glamour of the Las Vegas course, Mercedes driver Russell fears that it won’t be the most challenging on the calendar for drivers. “I don’t think this is going to be the most exciting one to drive,” said the British driver, as quoted by GPFans.

Russell, aged 24, has taken seven podium finishes during his first season with Mercedes and sits fourth in the championship with two races remaining. Despite his reservations about the course for drivers, he feels it will make for a good spectacle.

“For you guys watching, I feel like this race is designed for good racing, for overtakes and entertainment,” he added. “I think it’s super exciting, this race. It’s wild already. This time next year is going to be crazy. I can’t wait for it.”

Fellow Mercedes driver and seven-time world champion Lewis Hamilton was also at the Las Vegas launch event. The British champion partied with Diplo after the launch event to celebrate the music producer’s birthday and left a nightclub at around 2.30am.

Hamilton says that drivers will have to be focused on racing when the F1 series visits next year, but accepts it won’t be easy amid the lights and glamour of Las Vegas. He added: “Just driving down that strip. This race could be the best race of all time.

“We have races in Singapore and Monaco which are pretty hectic. It’s definitely not going to be easy (to focus). We’ll be here to try and win the race, but hopefully we’ll get to enjoy what this city has to offer.”