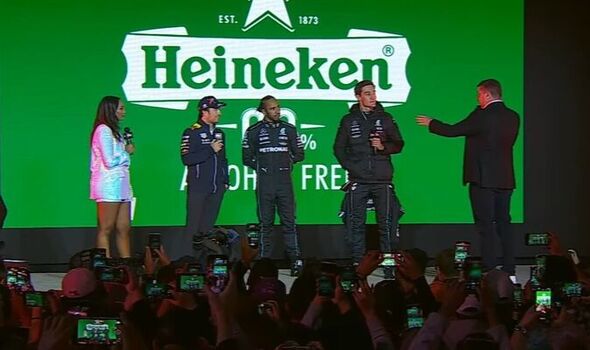 George Russell used the F1 Las Vegas launch party to take a sly shot at Sky Sports and Red Bull over their stand-off from the Mexican Grand Prix. Christian Horner and Max Verstappen took offence to comments made by Ted Kravitz when the F1 pundit spoke of how he felt Lewis Hamilton was “robbed” of last year’s World Championship title.

Horner felt they needed to take action in response, refusing to speak with Sky Sports throughout the race weekend in Mexico City. He said: ““It won’t have done Sky any harm for us to lay down a marker. Some of the commentary is fair but some pieces are sensationalist, and saying we robbed anyone of the championship, as was said in Austin, is going too far.

“It is not impartial or fair or balanced. We have said our piece and will go back to normal next race.” But Sky Sports appear to have managed to get around Red Bull’s boycott earlier than next weekend.

Sergio Perez represented Red Bull at F1’s Las Vegas launch party on Saturday night with Sky Sports pundits Naomi Schiff and David Croft hosting the event. They were joined by Lewis Hamilton and Russell on stage to speak about next year’s inaugural race in Las Vegas.

When Perez came out onto the stage, hundreds of fans were chanting ‘Checo’ while the hosts waited for a moment to ask the drivers questions. But Russell used the moment to crack a joke about Sky Sports’ stand-off with Red Bull, asking Croft: “Are you allowed to ask Red Bull drivers questions Crofty?”

“Yeah, I am tonight. I’ve got special permission tonight. Don’t start on me.” Croft then jokingly asked Perez whether he was “allowed to answer”.

The Red Bull driver looked away off-stage seemingly to seek permission, before laughing and saying: “They’re not here.” Schiff then brushed off the awkward line of questions, saying: “What happens in Vegas stays in Vegas.”

Martin Brundle jumped to the defence of his Sky Sports colleague Kravitz this week, calling on all parties to come together to find a solution. Brundle tweeted: “For the avoidance of doubt my friend and colleague for the past 26 years @tedkravitz has my full support.

“Face to face dialogue is the only way to sort out issues and disputes in the relentless crucible of the F1 paddock. We all have opinions and different jobs to do, that’s life.”