Lewis Hamilton said he is only human after his spin in Sunday’s Emilia Romagna Grand Prix allowed championship rival Max Verstappen to gallop to victory.

Verstappen roared past pole-sitter Hamilton down to the opening corner following a brilliant getaway at a rain-hit Imola and then held his nerve as the chaos unfolded behind him.

After switching to dry rubber, Hamilton was in hot pursuit of Verstappen but on lap 31 of 63, the world champion made an uncharacteristic mistake. Lapping George Russell, he slid off the track and into the gravel at the left-handed Tosa corner.

The seven-time world champion managed to reverse out of the sand trap and stop for repairs, fighting back from ninth to second. Lando Norris finished third for McLaren following the best drive of the Briton’s fledgling career.

Hamilton’s fight back through the pack was aided when the race was red-flagged after Russell and Valtteri Bottas were involved in a huge 200mph crash.

After calling Bottas a “f****** p***k” on the radio Russell marched over to confront the Finn, leaning into his Mercedes cockpit and slapping him on the helmet.

A 30-minute delay ensued before Verstappen cruised off into the distance, with Hamilton passing five drivers in 21 laps in an impressive display of damage limitation.

“It was very tricky out there but we are only human,” said Hamilton.

“It is not the mistakes that define you. You know I don’t make too many mistakes, and while it was gutting to be in that position I feel these things happen for a reason.

“I didn’t think I would finish second when I was facing that barrier. But I remember being there and looking at the barrier and I refused to believe the race was over.

“I could have turned the car off and got out but I was grateful I didn’t. After that, it was trying to switch the anger and turn it into positive energy and race forwards. That is an amazing blessing to be sent.”

In the closing stages Hamilton, who fought his way past Norris with just three laps remaining, recorded the fastest lap meaning he will head to the third round in Portugal with a single-point advantage over Verstappen.

He added: “Finishing second will be very valuable in the championship. If I had lost 25 points to Max today it would have been hard to recover based on the fact Red Bull have an incredibly fast car.

“They were faster than us this weekend. We have got a close battle, which we love. There are going to be a lot of exciting races up ahead.”

Verstappen should have won in Bahrain three weeks ago, but for an illegal move on Hamilton, while a mistake on his final lap in qualifying on Saturday cost him pole. 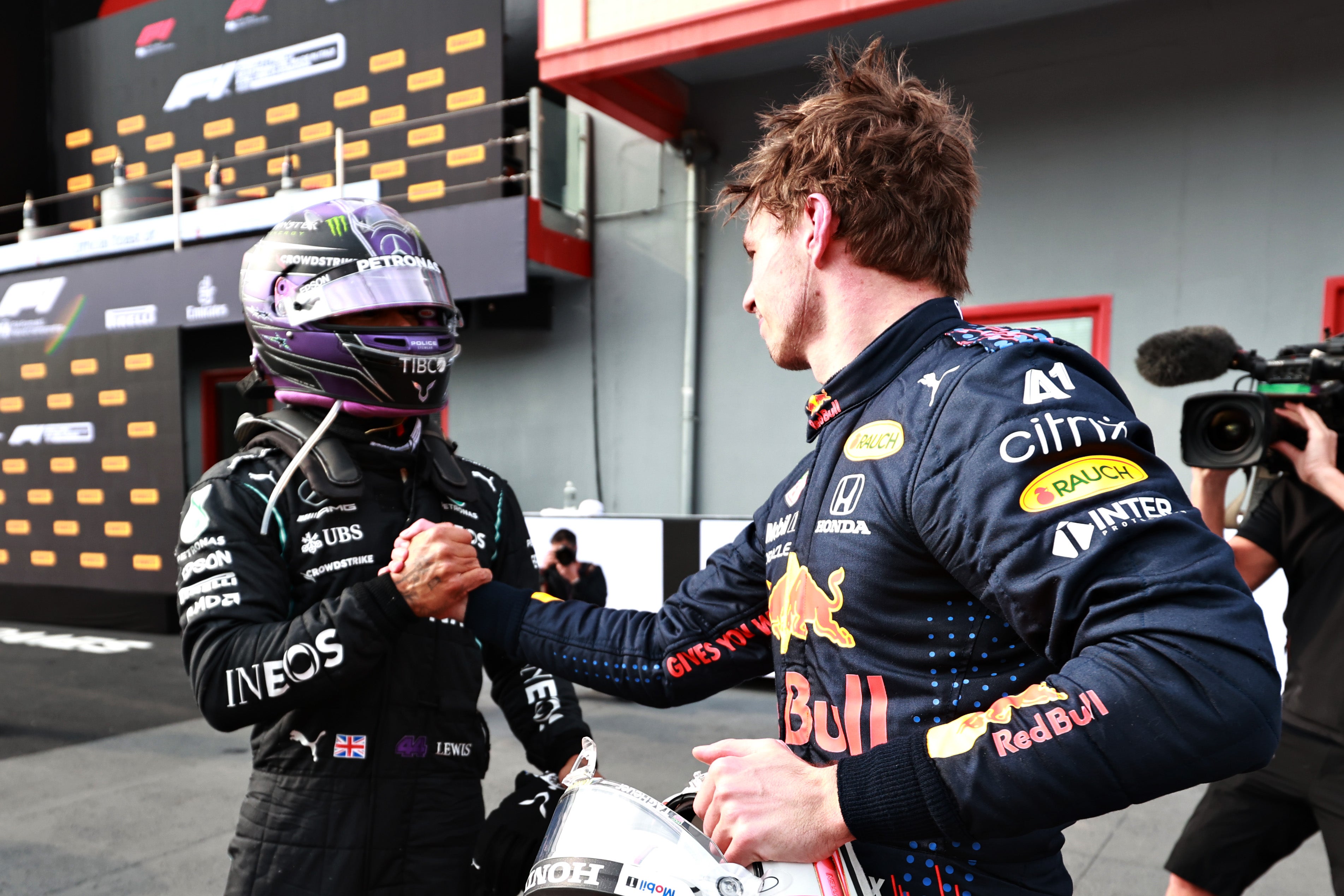 But the Dutchman, 23, delivered a largely faultless display in the inclement conditions to take his 11th career win and first of a season which has started with two classic races.

Following a deluge of rain an hour before the start, the drivers began on wet rubber and it was Verstappen, third on the grid, who executed a perfect getaway.

Racing past Red Bull team-mate Sergio Perez, he then moved to the inside of Hamilton at the opening corner with the latter forced to run over the exit kerbs.

Hamilton claimed Verstappen did not leave him enough room but the stewards looked at the incident and decided an investigation was not necessary.

The championship is now perfectly poised, with Hamilton and Verstappen‘s rivalry set to live up to its pre-season billing.

“Today was very good but it is a very long season so we have to keep working hard,” said Verstappen.

“I am happy with the result today but tomorrow we start again and we have to keep on improving. Lewis and Mercedes have been so dominant and difficult to beat. To be competitive after two races is promising but there are no guarantees.”