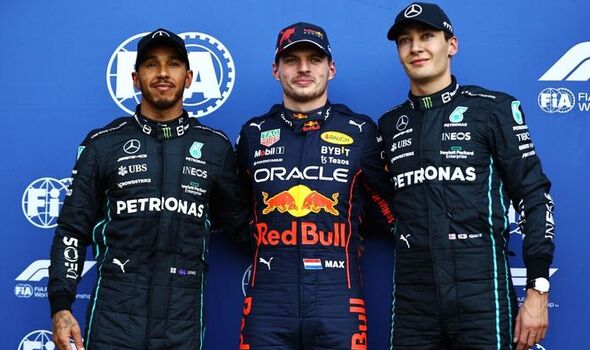 Lewis Hamilton is all set to sign a contract extension after the season finale in Abu Dhabi and he’ll have both Max Verstappen and George Russell in his sights next year. Hamilton’s reign of dominance with Mercedes came to an explosive end last year in one of the most controversial title deciders in F1 history.

The 2022 season was seen as Hamilton’s revenge mission, but he had one arm tied behind his back from the get-go. Mercedes were off the mark in their development of the W13 with both Red Bull and Ferrari way out in front.

Hamilton maintained a united front for the media, but he can’t have been happy to be fighting for positions in the middle of the pack while Verstappen picked up race win after race win. And the seven-time world champion was also struggling to get the better of his rookie team-mate Russell.

The 24-year-old finished ahead of Hamilton in seven of the opening eight races before Mercedes started showing some promising signs around the Azerbaijan Grand Prix. Hamilton managed to turn things around in the middle of the season against his team-mate and both are evenly-matched in terms of podium finishes.

But Russell had the honours of taking Mercedes’ long-awaited first win of the season last time out at the Brazilian Grand Prix. Hamilton now has just one race to maintain his record of winning at least one Grand Prix in every season he’s competed in F1.

Being 25 points behind Russell in the championship also means Hamilton will likely have to settle for second-best at Mercedes for this year. Only Jenson Button and Nico Rosberg can say they have finished ahead of Hamilton in the same team.

The 37-year-old will almost certainly want to avoid that scenario repeating itself next year. But more importantly for Hamilton will be his hope that Mercedes are able to compete from the very start of next season.

He’s still chasing the record-breaking eighth world title and he’s set to commit a few more years to Mercedes to make that happen. The Abu Dhabi Grand Prix on Sunday will be a chance for Hamilton to lay down a marker heading into 2023.

But when the lights turn green in March for the Bahrain Grand Prix, Hamilton will be hoping he has a car underneath capable of challenging for a world title. And he’ll likely be doing everything he can to show he’s still the No 1 driver at Mercedes.

F1 2020: Sebastian Vettel ready for Red Bull reunion but other options too