Home » Racing » Lewis Hamilton: 'I never dreamt we could get to seven championships'

‘I never dreamt we could get to seven championships’: Lewis Hamilton says move to Mercedes was decisive as he seeks to equal Michael Schumacher’s record at the Turkish Grand Prix

Lewis Hamilton has admitted that reaching a record-equalling seventh world title on Sunday would be a feat beyond his wildest dreams.

The 35-year-old Brit won the first of his championships with McLaren in 2008 before reeling off six in seven seasons after joining Mercedes in 2013.

Now Hamilton is assured of taking No 7 if he wins the Turkish Grand Prix. Lewis Hamilton walks in the paddock with his dog, Roscoe, in Istanbul on Thursday

Hamilton, who triumphed at Istanbul Park in 2010, said: ‘I never dreamt we could get to seven championships.

‘Getting one was great and it was very tough to get the second. I had to make a big decision whether I stayed put and kept travelling along or do something more adventurous (joining Mercedes).

‘I took that leap of faith and I have won one after another. I am just trying to count my blessings.’

Mercedes’ dominance is underlined by Hamilton’s team-mate Valtteri Bottas being the only man with even a mathematical chance of stopping the Briton’s title juggernaut. The Finn is 85 points adrift with 104 remaining across the four final rounds. 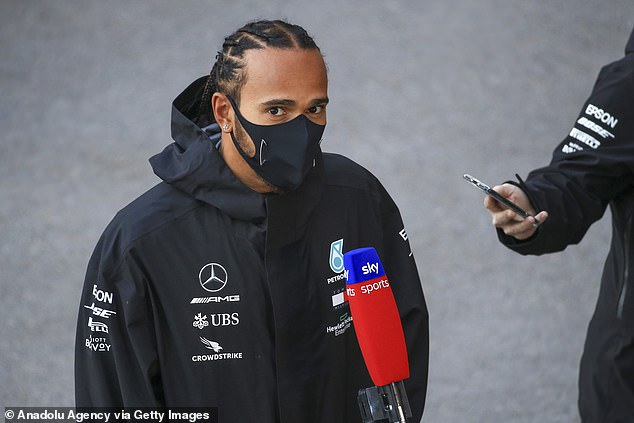 Hamilton added: ‘I remember watching Michael on TV and when he got to seven it was like “wow”.

‘We are going to continue to fight for more championships. Matching an icon like Michael would make me incredibly proud but the message it sends to kids is to dream bigger than you think you can dream.’

Fellow Brit Lando Norris, who turns 21 on Friday, joined the chorus calling for Hamilton to be knighted in the New Year Honours.

The McLaren driver said: ‘Only one person in the whole world has achieved what Lewis has done, and that’s Michael Schumacher.

‘Lewis has led the way in many aspects, on the track but also off it. A lot of athletes who have done such things in other sports have got knighthoods so I see no reason why he shouldn’t.’