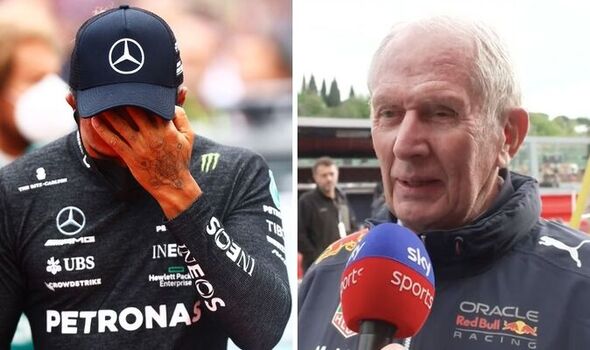 Red Bull chief Helmut Marko has claimed Lewis Hamilton may now be wondering why he didn’t call time on his F1 career last season after the Mercedes star endured yet another afternoon to forget at the Emilia Romagna Grand Prix. The seven-time world champion has had a rough ride so far this season and his rotten luck continued in Imola as he finished pointless in 13th place.

Yet there was further humiliation when Hamilton was labelled by his rival Max Verstappen, who is continuing to chase down runaway leader Charles Leclerc.

Hamilton is now seventh in the driver’s standings and finds himself a whopping 58 points behind the 24-year-old Monacan.

To make matters worse, Red Bull’s Marko has now jokingly suggested that Hamilton may be regretting his decision to race on.

“I mean, he was lapped by us,” Marko told Craig Slater of Sky Sports News. “Maybe he is thinking he should have stopped last year!”

Hamilton was not shying away from his own struggles though and conceded that his title hopes had now faded after a disastrous weekend in Imola.

“A weekend to forget, that’s for sure,” said Hamilton.

“I’m out of it, for sure. There’s no question about that, but I’ll still keep working as hard as I can to try and somehow pull it back together somehow.”

Toto Wolff even offered an apology to his driver Hamilton, who had to endure a number of different obstacles throughout an incident-packed race.

Speaking immediately after the race, Wolff said: “Hi Lewis, Sorry for what you have had to drive today.

“I know this is un-drivable and not what we deserve to score as a result. This was a terrible race. We will come out of this.”

To which the 37-year-old replied: “Yeah, no worries, Toto. Just keep on working hard.”

Two-time world champion Mika Hakkinen recently suggested that Hamilton may in fact be wishing he was part of another team, though the Mercedes man rejected those rumours as ‘nonsense’.

“I’m afraid this will be a really difficult season for Lewis,” the 1998 and 1999 world champion told Unibet. “Now start the natural thought process of drivers. Should I go somewhere else? It’s a fact.”

But Hamilton disputes those claims and has once again reaffirmed his commitment to turning things around with Mercedes.

“There is nowhere else I want to be. Just because we have hit a rough patch, it is not in my DNA to back out,” he said.

“We can fix this. It is going to be a painful year that we are going to have to ride out together.”