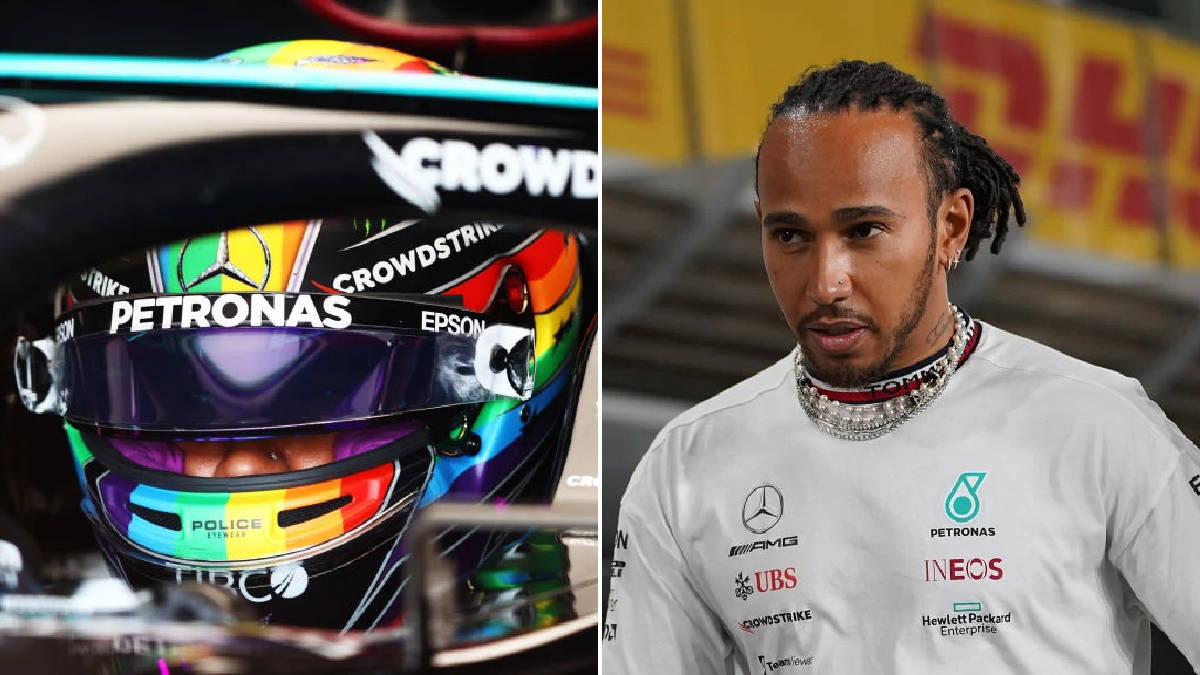 Lewis Hamilton has ditched his usual Formula One helmet for this weekend’s Qatar Grand Prix and is instead wearing an LGBTQ+ Progress Pride rainbow flag.

Qatar is hosting its first ever F1 race with Mercedes’ Hamilton locked in a title battle with Red Bull’s Max Verstappen, though the decision to take the sport to a country with such a questionable record on human rights has prompted criticism.

The 2022 World Cup hosts have strict anti-LGBTQ+ laws and same-sex relationships can be punished by imprisonment, while they are facing new allegations of worker exploitation and abuse.

Hamilton has never shied away from confronting such issues head on and has opted to race in a rainbow flag this weekend as well as calling for nations like Qatar to face greater ‘scrutiny’.

The 36-year-old took to the track at the Losail circuit in Doha on Friday for the first practice session and revealed his new-look Progress Pride-inspired helmet, which incorporates additional colours to represent other marginalised groups.

Hamilton traditionally has the motto ‘Still I Rise’ on the back of his helmet, which is taken from Maya Angelou’s poem, but has swapped it for ‘We Stand Together’.

The Progress Pride flag was designed by an artist called Daniel Quasar and includes additional colours such as black, brown, pink, pale blue and white stripes to represent people of colour in the LGBTQ+ community, as well as the trans community and those living with HIV/AIDS.

Hamilton has frequently spoken out on F1’s need to confront issues and problems in the countries they visit, and he did so again at a pre-qualifying press conference in Qatar.

‘We’re aware there are issues in these places that we’re going to, but of course [Qatar] seems to be deemed as one of the worst in this part of the world,’ said the seven-time F1 champion.

‘As sports go to these places, they are duty bound to raise awareness for these issues. These places need scrutiny. Equal rights is a serious issue.’

Hamilton also supported LGBTQ+ rights at the Hungarian Grand Prix earlier in the season, describing the government as ‘cowardly and misguided’, while fellow driver Sebastian Vettel was warned for wearing a rainbow T-shirt in Budapest.