Lewis Hamilton has been crowned Formula One world champion for the fourth successive year and the seventh time overall to tie level with Michael Schumacher as F1’s all-time most successful driver. The Brit won a dramatic Turkish Grand Prix on Sunday to mathematically secure the drivers’ championship once again despite only pitting once in challenging conditions.

Hamilton only last month equalled Schumacher’s record of 92 race wins and surpassed the German icon with his victory at the Emilia-Romagna Grand Prix at Imola last time out. He now stands on 94 victories after his win in Turkey.

He only needed to avoid finishing eight points or more behind team-mate Valtteri Bottas, who had a disastrous afternoon in Istanbul.

Hamilton started sixth with Bottas in ninth after the two Mercedes drivers struggled on both Friday and Saturday, where rainy conditions gave the constructors’ champions huge problems.

Bottas’ woes were compounded in the race with two first-lap spins as he battled Esteban Ocon. The Finn fought to climb back up the pack but then suffered multiple further spins.

That meant he was well down the pack and he ultimately failed to finish in the points, with only Kimi Raikkonen and George Russell – in 15th and 16th respectively – finishing behind him. 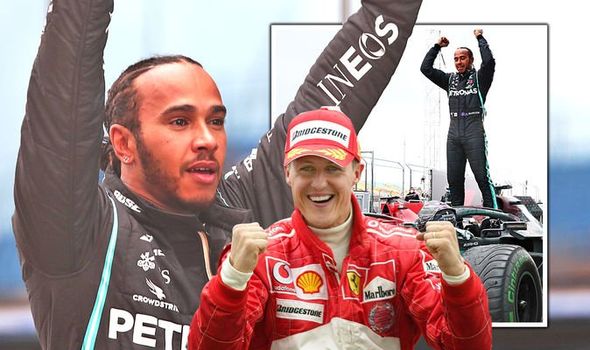 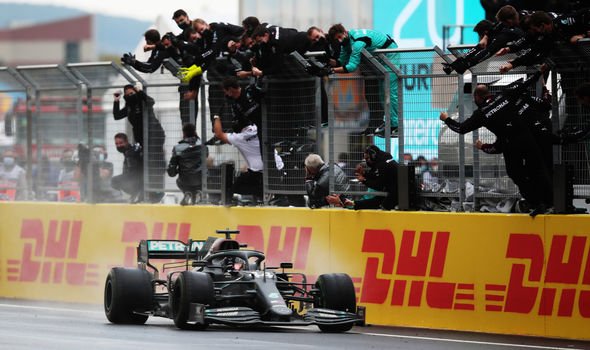 Hamilton, by contrast, managed to haul in the early pace-setters to eventually lead the race, taking over Racing Point’s Sergio Perez.

Hamilton even lapped Bottas, who was running in 13th at the time, on lap 46 as he eventually opened up a lead of nearly 30 seconds over Mexican Perez despite running on ageing intermediate tyres.

The race leader opted against taking a late safety stop to put on fresh inters and still reached the chequered flag well before any of his rivals, with Ferrari’s Sebastian Vettel also managing a rare podium behind Perez.

The 35-year-old was in tears on the team radio and clearly emotional, declared in his post-race interview: “Thank you. I definitely am a bit lost for words! I think naturally I have to always start with saying such a huge thank you to all the guys that are here and who are back at both the factories and all our partners for enabling us and giving us this opportunity.

“I wouldn’t be able to do this if I didn’t join this team. The journey we’ve been on has been monumental. I’m so proud of them. I want to also say a big, big thank you to team LH for sticking with me for all these years and to my family.

“We dreamed of this when we were young and when I was young when we were watching the Grand Prix. This is way, way beyond our dreams. It’s important for kids out there to see this and not to listen to anyone who tell you you can’t achieve something.

“Dream the impossible. Speak it into existence and work for it, chase it, you’ve got to never give up and never doubt yourself.” 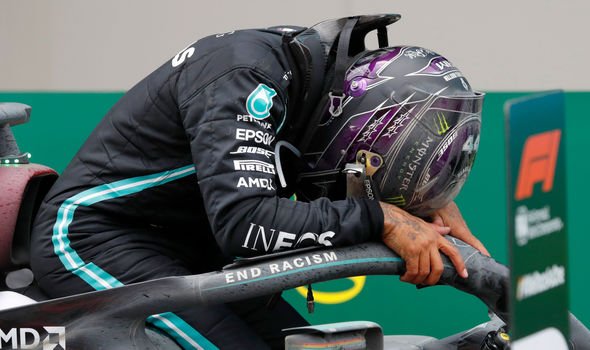 “Today we knew coming here was such a difficult weekend, we weren’t massively disappointed with our qualifying position. We knew that we were on the back foot and we did the best we could.

“Then we learned a lot. That’s what we do as a team. There’s no blame game, we hash it out and we continue to try to improve our communication so we can make moves forward.

“We don’t always get everything perfect but today, we had that small moment at the beginning of the race with the new tyres and then I couldn’t get past Seb for a while.

“I could see Albon pulling away and I thought, ‘Jesus this race is falling through my fingers.’ I just kept my head down and kept believing I would pick up pace of some sort at some stage and that’s what I did.”

Hamilton’s victory meanwhile was more than enough to wrap up his seventh career triumph, his sixth in seven seasons since joining Mercedes in 2013.

Only Nico Rosberg – in 2016 – has denied Hamilton the drivers’ title since his switch from McLaren to the Silver Arrows, who have now managed seven straight double titles in the sport’s hybrid engine era.

Hamilton’s current Mercedes contract expires at the end of this season but he is widely expected to pen an extension.

And staying on into 2021 would offer him the opportunity to surpass Schumacher and have more titles than any other F1 driver.

If he is victorious next year too, he would tie with Schumacher for the most consecutive title triumphs, the Ferrari icon having managed five straight between 2000 and 2004.