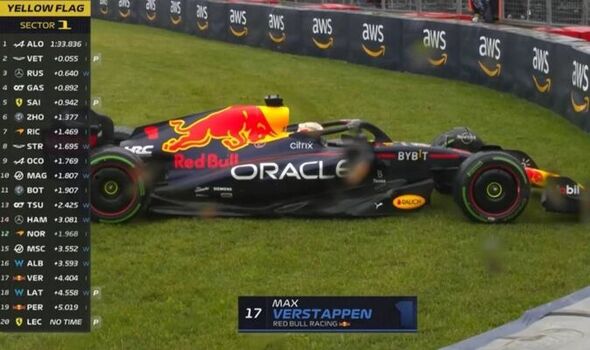 Max Verstappen had a far from ideal FP3 session with qualifying just hours away, but it could have been a whole lot worse after he went off the track at Turn 2. The reigning F1 world champion had opted to stay in the garage for the first half of the final practice before coming out on track with 24 minutes to go.

But he abandoned his lap and headed straight back into the pits after an error at Turn 9. Red Bull then put some intermediates on Verstappen’s car to try and set a lap in the wet conditions.

The Dutchman was finally able to get a lap time in, but his first was 4.4seconds off the pace. While pushing down the straight to start a new run, Verstappen was caught out by the tricky conditions around Turn 2 and went off into the grass.

Verstappen narrowly avoided hitting the barrier though and kept his engine running to come back on the track and set a final lap time. Karun Chandhok said on Sky Sports: “He is very lucky to get away without touching the barrier.”

Kevin Magnussen had gone off in the same spot earlier in the session, but like Verstappen, was able to avoid a crash. Any damage to the cars in FP3 would have been a disaster for Red Bull mechanics, who would have had to frantically work on fixing the car with qualifying just two hours away.

Charles Leclerc won’t be a threat for pole this weekend though after Ferrari took an entirely new power unit. He had already been given a 10-place grid penalty for fitting his third control electronics system of the season.

But Ferrari have now installed a new ICE, turbocharger, MGU-H and MGU-K, forcing Leclerc to start from the back of the grid on Sunday. The news will come as a huge boost to Red Bull, who will stand a great chance of extending their lead at the top of both championships.

Verstappen and Sergio Perez hold a good lead over Leclerc in the Drivers’ Championship and Red Bull are 80 points ahead in the Constructors’. Leclerc had shown good pace on Friday when he matched Verstappen’s time in FP2.

But Ferrari’s hopes will now rest on Carlos Sainz, who is yet to win a race in 2022 so far.