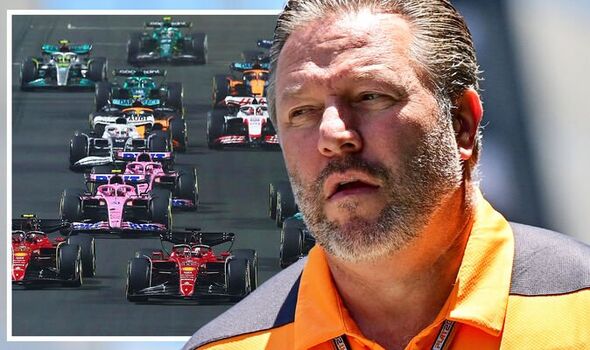 McLaren CEO Zak Brown has called for the FIA to introduce a new system to annual F1 calendars. Brown said he wants to see a maximum of 21 or 22 races on the calendar down on this season’s 23.

However, he has also called for a rotational system with different races every year. He said there should be some permanent fixtures which remain every season but claimed around eight tracks could make more occasional appearances.

Speaking to Reuters, he said: “If you could wave a magic wand I’d like to see something like 21 or 22 races. Seventeen or 18 as permanent fixtures and seven or eight that rotate because I do think to continue to grow the sport the more quality markets we can be in the better.

“I’d love to see us be in 30 markets but race 21 or 22 times a year. I think there are A markets and B markets that we race in. Maybe your B markets (should be) every other year.”

His comments come a week after F1 announced they will be racing in Las Vegas from 2023. The new race will be held on the famous strip in late November.

During coronavirus, F1 raced at several new locations such as Losail in Qatar and Mugello in Italy. Classic tracks such as Imola and Turkey’s Istanbul Park circuit also made re-appearances.

Last year, F1 CEO Stefano Domenicali claimed they were “looking at” whether a rotational system could work. He said the US market would be ready for it while F1 were also in talks with Africa and the Far East.

Ahead of the new season, Domenicali reaffirmed there was enough interest in F1 for 30 races and doubled down on plans for a rotational calendar.

He warned some existing circuits could be lost on a more permanent basis but may make occasional appearances.

He said: “There are some promoters who have expiring agreements, and probably some of the current grands prix will no longer be part of the calendar. Others will remain but in a different form, such as rotating between different tracks. Soon the choices we are making will be announced, and you can expect some new grands prix. However, it is still not easy to plan everything in advance.

“We know we have to balance the arrival of new races with historic grands prix, and tracks that must continue to be part of our calendar. The arrival of offers from new promoters has an advantage for the F1 platform, and that is to force the organisers of traditional grands prix to raise their level of quality, in terms of what they offer the public, and infrastructure and management of the event.”