Melbourne youngster Oscar Piastri has made a superb start to his career in Formula Two, coming from the third row of the grid to win a Super Sprint race in his debut round in the category in which emerging Formula One stars compete.

However, his hopes of adding to his sensational victory were dashed close to the end of the third race, which made up the final event of the three-heat round in Bahrain late on Sunday night.

But Piastri’s performance at his first try in the feeder category for F1 will have ensured team bosses will have his name in their notebooks. 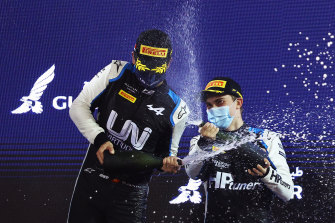 Oscar Piastri celebrates his win in race two of the opening round of the F2 championship with second-placed Guanyu Zhou of China at the Bahrain International Circuit on Saturday.Credit:Getty Images

The 19-year-old, who won the Formula Three title last year, described the victory in the second race in Bahrain on Saturday night as “the craziest race win I have ever had in my life”.

He had been as far back as ninth place during the 23-lap contest, having experienced a race pit stop for the first time in his life.

Piastri ticked off one major box when he won the F3 title in 2020, and is set on dominating F2 this year for the Prema Team, which powered Mick Schumacher to the title last year.

Schumacher made his F1 debut for the Haas team on the same Bahrain circuit at the weekend at which Piastri staked his claim for this year’s F2 title.

The Australian youngster finished fifth in the first of the three races which make up the opening round of the F2 title, Kiwi driver Liam Lawson standing atop the podium.

In the second race Piastri avoided a first-corner melee before struggling for race pace in the cooler night conditions. 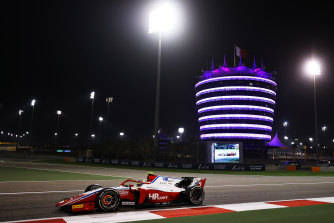 But he got a lucky break when the safety car was called into action following an incident involving race leader Lawson.

He dived into the pits and switched to fresh soft tyres, emerging in ninth position.

Piastri was able to charge his way through the field, eventually taking the lead on the last lap to win from Guanyu Zhou, with Indian Jehan Daruvala third.

“That has to be the craziest race win I’ve ever had in my life,” Piastri said.

“We struggled during the first half of the race on hard tyres and, to be honest, I wasn’t driving good enough, still getting used to the grip change we had from the earlier race.

“I did my first-ever pit stop, that was pretty daunting, and I pulled off a few good moves at the end.”

In the third race, Piastri was challenging for the lead with just a handful of laps remaining and looking good for a podium finish at least when he was involved in an accident that sent him spinning into the gravel trap and out of contention.

A strong finish would have put him right in line for series leadership but instead he had to watch on as Chinese driver Zhou sped to the win which, for the time being, has put him top of the standings.