Home » Racing » Ricciardo still one of the fastest in Formula One: Verstappen

BARCELONA: Max Verstappen believes Daniel Ricciardo remains one of the fastest drivers in Formula One despite the Australian failing to finish on the podium last year in his first season at Renault.

Verstappen, 22, and the 30-year-old Ricciardo were paired at Red Bull for three seasons before Ricciardo elected to move to Renault on a two-year deal from 2019, a decision that moved Red Bull team principal Christian Horner to describe Ricciardo's defection as "running from a fight" with his younger teammate. 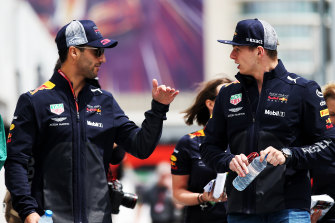 Ricciardo and Verstappen were evenly matched for much of their time together and enjoyed an amicable working relationship despite occasional flashpoints, the most dramatic coming in the 2018 Azerbaijan Grand Prix when the duo clashed at high speed, taking one another out of the race.

Asked by The Age if Formula One was poorer for Ricciardo not featuring at the sharp end of the field last season after the Red Bull, Mercedes and Ferrari drivers annexed 60 of the 63 available podium places, Verstappen was quick to reference the Australian's speed.

"Daniel is smiling a lot and he's a very happy guy, but I think he would be smiling even more if he was winning races and being on the podium. I know Daniel and I know Daniel is very fast, so I can imagine last year was not the easiest for him.

"It's very hard to compare against someone like [world champion] Lewis [Hamilton], because there is no real comparison. But Daniel was faster than Seb [Sebastian Vettel] in the year they raced together [at Red Bull in 2014], and I've raced alongside him long enough to know that he's a very fast guy."

Verstappen said trying to match Ricciardo's speed fast-tracked his development as a driver.

"When I first joined Red Bull [in 2016] I was very inexperienced and throughout the years I became stronger and more connected in the team, but he was a nice teammate because we were pushing each other very hard," he said.

"That was very good for the team because we were trying to fight each other to find that final tenth [of a second], and the whole team lifted because of that.

"He was nice to work with, and I loved that time."