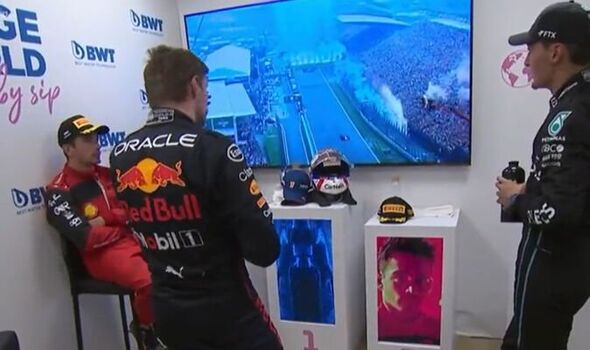 Max Verstappen, Charles Leclerc and George Russell secured the podium places at the Dutch Grand Prix after overtaking Lewis Hamilton at a safety car restart with 12 laps of the race remaining. The Mercedes star was raging over the team radio when he was left hung out to dry by an unusual strategy cal.

Mercedes were 1-2 under the safety car but Russell was called into the pits for fresh tyres. That left Hamilton exposed and Verstappen capitalised on the first corner when the race restarted.

“That was the biggest f*** up,” he shouted on the team radio. Leclerc followed Verstappen past Hamilton before Russell made his own move as the two Silver Arrows came close to touching.

When the three podium sitters entered the cool-down room the TV was showing replays of the key incidents. 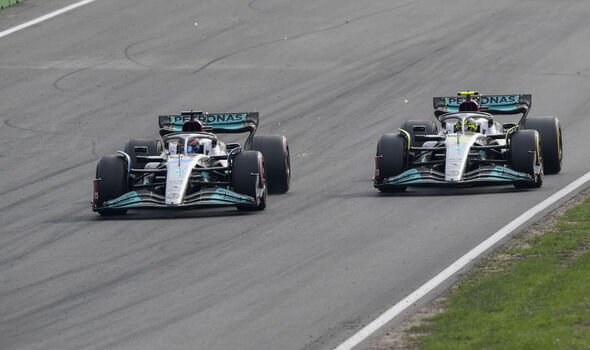 Russell started the conversation by saying “that was very close” as his near crash with Hamilton was replayed. Leclerc commented: “From the outside I thought you had touched.” Russell explained why Hamilton found it so difficult when the safety car left the track: “It’s impossible to restart on the used tyre.”

Verstappen agreed, adding: “He had no grip.”

Hamilton later apologised for his outburst during the race and took solace in that he finally has a competitive car.

“My apologies to the team,” he said. “I don’t know what I said, I lost it for a second and I think they know it’s so much passion. I want to look at it as a glass half full.

“We struggled coming here from Spa and fighting against the Red Bulls. We were quicker than most, but if it were for the safety car I think we would have challenged him [Verstappen] on the one-stop, which I don’t think the others could do.

“So many things to take away. The car is finally working and if this can be the same for the next few races we will breathe down their necks and we will get that win. The last race we were miles away and we didn’t understand and yesterday I was pole until the last corner.