I wrote a report on the 2021 draft prospects for Collingwood before I left the club back in 2019. Of course, the boys were mostly 16-year-olds then; it was pre-pandemic and a lot can happen in two years. But for recruiters, there is still a lot to be gained from assessing the players two years out from the AFL draft.

Every year about 60 per cent of draftees come from Victoria, so it is really important to have some sort of handle on who might be available in two years’ time, even more so now that clubs can trade future picks in the draft.

Some of the best players at under-16 level can disappear by the under-18s, while others arrive from nowhere. At Collingwood, the recruiters used to try to predict the top 15 in February in the year of the draft, which is held in November, and nine has been the best result. 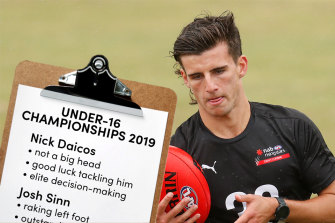 Nick Daicos impressed at the under016 championships in 2019.Credit:The Age

What we assess from the under-16s is the overall standard of the games, the depth of talent, player types – key backs and key forwards, small forwards, hybrid forward/midfielders, small backs, running backs, midfielders of different shapes, sizes and skills, and rucks. Athleticism, work ethic, influence, competitiveness, leadership and durability are all qualities we will look for, which give us a good base for the following two years. We have to be careful to not fall in love with a player at this stage as there are still many unknowns. Brodie Grundy had played only seven games of football before playing in the under-16 championships, and many top 10 players in the draft did not even play under-16s. Clayton Oliver springs to mind.

It has been a horribly difficult two years for recruiters with no Victorian games played in 2020, and limited games this year, too. The average number of games played by Victorian players in the NAB League is 6.7. Recruiters haven’t been able to travel interstate and are relying on their part-time talent scouts and vision. There can be a tendency to overrate the local players from SA and WA because you see them every week, but the standard isn’t to the level of the NAB competition. Without watching players live it is very challenging to pick up work ethic, running patterns, decision-making, leadership, selflessness. There seems to be a misconception, at AFL administration level and even at clubs, that just watching vision is adequate in selecting players and this couldn’t be further from the truth. It is absolutely vital to watch players live.

I rated the under-16 championships in 2019 as excellent, and by association I loved the look of this year’s draft class, albeit two years out. The Vic Metro team was outstanding and were pushed all the way by an extremely competitive Vic Country team. South Australia and Western Australia were also good, but a distance behind, while NSW, Queensland, Northern Territory and Tasmania were a bit light on, although there were some standouts. This has been confirmed by the lack of academy players attached to the northern clubs this year. 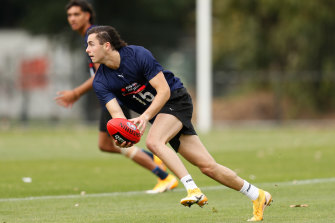 Josh Sinn in action in April during an academy training session.Credit:AFL Photos

Looking back at my notes, here’s how I assessed the top six at the time.

The real interesting thing here is that Sinn and Chesser have hardly played over the past two seasons, so a leap of faith is required to take either in the top 10. But they are an absolute bargain for clubs between picks 10 and 20. Sam Darcy, Finn Callaghan, Mac Andrew, Jye Amiss, Neil Erasmus and Nasiah Wanganeen-Milera – all projected top 10 selections – didn’t even play under-16s, which is in keeping with history.

Interest in the draft this year will also centre on whether GWS trade their pick No.2 for two later first round picks, or even move back to four or five for a future first-round pick. They will do this if they think that their target player will still be available. Horne-Francis will go to North with pick No.1 and the Giants are supposedly keen on Andrew, with Gold Coast super keen on Callaghan. But so are the Crows and the Hawks at pick five. The interest will be in whether GWS can still pick Andrew at four or five if they trade back. I think they will still get their player and pick up something else valuable. I don’t think the Suns are going to take Andrew. Watch with interest on draft night as deals will have already been discussed, maybe even between Gold Coast and GWS to head off the Crows and Hawks.

There will be only about 55 players selected this year due to the lack of viewing. Expect some delisted free agents to be selected at the end, along with many trades of draft picks on the night. This is exciting, as clubs will have vastly different lists of draftable players. I was very bullish on this draft two years ago and there will be many excellent players selected. I look forward to seeing them play next year, but a word of warning: we must be patient as the Victorian boys will be physically underdone, and take time.

‘What it’s all about’: Teams share Bledisloe beers after rugby classic