Home » Rugby » A Wallaby threw his World Cup medal into Sydney Harbour. He regretted it ever since

In the wee hours after the Wallabies’ loss in the 2003 Rugby World Cup final, lock Justin Harrison pulled out his runners’ up medal at the Cargo Bar in Darling Harbour and hurled it into the harbour.

Silver medals are for the first losers, sort of thing. 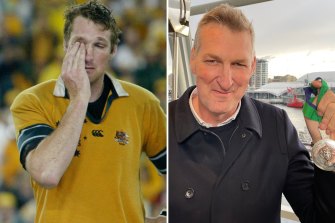 Justin Harrison, refusing to wear the 2003 World Cup medal (left) and with his replacement medal.Credit:Getty

It was an impulsive decision that Harrison came to regret, particularly when the now RUPA president had kids and wished he had that medal to give to his boys, Jack and Hugo.

This week, in a brilliant act of friendship and generosity, RFU president Jeff Blackett surprised Harrison with a replacement medal in a set-up moment captured by the Stan Sport cameras. Harrison had been instructed to head down to Cargo Bar to talk about Australia-England rivalry with Morgan Turinui, when he was led into the story about his medal. Midway through Blackett appeared and sprung the surprise.

Through World Rugby boss Bill Beaumont, Blackett had contacted the makers of the 2003 World Cup medals, who still had the original mould. The RFU and Rugby Australia chairman Hamish McLennan paid for another to be made.

We won’t spoil the whole thing but the clip will be shown in the pre-Test coverage on Stan Sport on Saturday night, and cop the tip – make sure you catch it. Like the teary Harrison, who is also surprised by his boys FaceTiming from holidays in Ireland, you may want the tissues on standby.

“It’s very humbling to contemplate the amount of effort and people involved to make this happen,” Harrison told us. “Rugby has the great capacity to bring people and nations together as fierce combatants but also loyal, compassionate mates. Our boys now have a real time example of what it looks like to be part of the rugby family.”

The Wallabies were flogged in a mini pre-season when they got into camp and the Cauliflower has been told there are questions flying about whether the load contributed to the injuries. Asked if there’d been a system failure in the soft tissue injuries, Wallabies coach Dave Rennie said they are reviewing the issue.

“We’ve been doing that. We’re going into a bit of detail,” Rennie said.

“We’ve put a lot of time looking at the individuals and everything we’ve done and anything we’ve added into the program just to ensure we don’t have a repeat of that. But it happens in our game. Games are faster and games are tougher, bigger collisions and the risk of injury is higher.“ 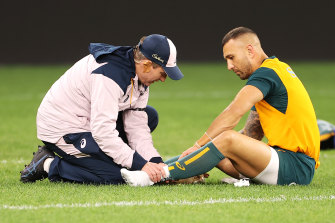 Quade Cooper injured himself in the warm-up before Australia’s first Test against England.Credit:Getty

Former Wallabies lock Luke Jones will be joining the Queensland Reds on a three-year deal next year and it may be perfect timing, given the current injury crisis in the Australian lock stable. Rugby Australia have contributed to the Jones deal and given Izack Rodda is out for several months, Jones could be a handy man in reserve for Dave Rennie to call upon.

Meanwhile, there is still water to pass under the bridge before Tolu Latu returns to the Waratahs. Latu is still at the talking phase with NSW about a contract, which will be heavily laden with behavioural clauses.

England roused on by Coogee lifeguards

England have been the talk of the town in Coogee this week, with coach Eddie Jones and his players enjoying their time in the beachside suburb where he played his rugby for Randwick. 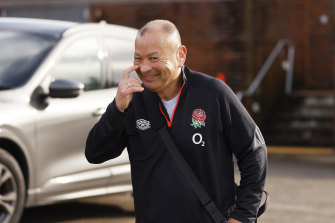 Although the weather has been up and down, our spies tell us England’s players were keen to make the most of an opportunity for a swim at Coogee beach.

Lifeguards had closed the beach due to a big swell but that didn’t some of England’s big forwards walking towards the surf in their budgie smugglers.

According to our spies, eagle-eye lifeguards got on the loudspeaker to tell England’s players to get out of the water, just as they’d dipped their head under. They obliged.

One of the touring English journalists was also told off when he tried to duck in for a quick lunchtime dip.

There have been plenty of catch-ups in the eastern suburbs this week with England’s arrival in town. So, which former Wallabies assistant coach was spotted grabbing a selfie with England halfback Danny Care after grabbing a coffee in Coogee on Tuesday?

Rugby Australia announced on Thursday that Saturday’s Test has officially sold out. It’s the first Test at the famous ground since the Wallabies played Argentina in 1986. Captained by Simon Poidevin, the Wallabies thumped the South Americans 26-0 that day. 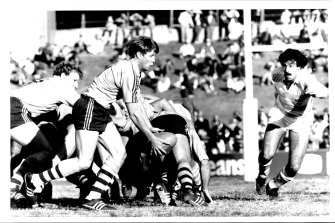 Wallabies halfback Nick Farr-Jones in action during Australia’s last Test at the SCG in 1986. Credit:Fairfax Media

Fullback David Campese scored two tries, while No.8 Steve Tuynman picked up another.

The pubs in Paddington will be pumping on Saturday afternoon, where hundreds of rugby fans will be parked up watching the third and deciding All Blacks and Ireland Test from 5:05pm AEST.

Meanwhile, we’re told Mark Ella, who recently had the Australia-England trophy named after him, won’t be present at the game. He is overseas with his daughter, who is about to give birth.

Need rain? Give Bernard Foley and the crew at AquaRugby a call.

The former Wallabies No.10 is one of the people behind the splashy new rugby event, which sees 5-a-side club and invitational teams playing on a pontoon field floating in the middle of Manly Cove.

You score by diving into the water, watched on by types on luxury boats and people on the wharf and beach.

The inaugural event was held in March this year, but if you remember March, you’ll also remember it didn’t stop raining for about two months. Foley and AquaRugby co-founder Jimmy Galvin did well just to get the event, which had even been postponed earlier due to COVID lockdowns, happening on a choppy Sydney Harbour.

The second season of AquaRugby was launched in Manly with a boat cruise on Thursday and, of course, it rained. Their luck is sure to turn for the November 10-12 event, which will see ambassador Ma’a Nonu join one of the teams.

“The weather hasn’t been kind but it’s been great for us to learn and be agile and put the events on regardless,” Foley said. “It’s a great festival of rugby. At the start of summer, a beautiful Sydney summer afternoon on the Harbour, it should be awesome.”

Foley’s dream is for AquaRugby to tour each of the cities involved in the 2025 Lions series.

Watch every match of the July Test Series on the Home of Rugby, Stan Sport. Kicks off this weekend with Wallabies v England (Saturday 7:15pm AEST), All Blacks v Ireland (Saturday 4:30pm AEST), South Africa v Wales (Sunday 12:55am AEST) and Argentina v Scotland (Sunday 5:05am AEST). All streaming ad-free, live and on demand only on Stan Sport.

‘Embarrassing’ NRL upset says it all

Team of the week: The top performers from Super League Round 17