Defending the modern key forward is no simple task.

Think of the King twins, Harry McKay, Jamarra Ugle-Hagan and even the incoming Sam Darcy. 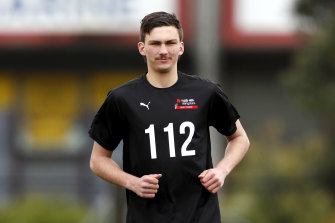 Young defender Josh Gibcus could be taken in the top 10 of the AFL draft next week.Credit:AFL Photos

If not through their height and leap, they often impose themselves with their speed and silk. Clearly, there is a new need to combat the growing contingent of athletically gifted tall forwards. Enter Josh Gibcus.

The likely top-10 pick has cemented his standing as the best key back in the draft, and appears set to forge an AFL career as an athletic, intercept-marking defender who is equally adept at playing shutdown roles.

“My athleticism helps me to play that higher key defender role, as like a centre-half back, roaming around and taking intercept marks but also shutting my opponent down,” Gibcus told The Age.

“My one wood in my game is my ability to come off my player, read the ball and take that big mark, [but] I can play both those roles: peel off and intercept, or a lockdown defender.”

When quizzed on the bevy of young tall forwards making their mark as athletic beasts, Gibcus gave a self-assured response: “I reckon I could match up against those guys.”

David Loader, who coached Gibcus at the Greater Western Victoria Rebels this season, is also confident in the key back’s ability to provide an answer to the modern forward.

“He’s a physical freak, and I say that in the kindest way,” Loader said. “He’s got the ability to jump over small buildings. He’s really quite quick as well, and he’s got good endurance.

“With the changing of the game and some of the young stars that are playing as key forwards in the competition now, they’re not necessarily big, stand and deliver contested beasts, but really athletic talls that mark the ball at the highest point.

“You’re going to need a hell of an athlete to play on these guys, and Josh, he fits that mould pretty well.”

Gibcus has only played as a defender since being successfully trialled in the position in a state under-16 match. He was previously deployed as a forward-ruck.

The 196-centimetre tall commenced his football journey in Brisbane, where he spent most of his childhood.

“I’ve been playing from when I was five years old up in Queensland. From there I really fell in love with the game and everything about it. A team sport that you go out and play with mates, I saw that as my passion,” Gibcus said.

He moved to Perth due of his father’s work, but arrived in Victoria as a 14-year-old to be closer with extended family.

Gibcus recalls relishing the move to the football-mad state. “I really did want to come down here because I’d heard about the strength of football, the vast majority of good players were from Victoria,” he said. “I wanted to test my talent against those sorts of blokes.”

The defender is also confident in his ability to direct teammates, and would have considered becoming a teacher as an alternative to football.

“If it wasn’t for footy, I think I’d go down a teaching pathway,” he said. “I think I have an ability to pass on information to others.”

Football, however, remains a clear priority. When recently questioned by one club on which three items he would save if his house was on fire, his first answer showed his passion: “A footy.”

England and Ireland united behind their talismanic second rows