The Western Bulldogs are set to trade out pick 23 to Geelong before Greater Western Sydney use pick No.2 to bid on Bulldogs father-son prospect Sam Darcy, in what promises to be a dramatic opening to the 2021 national draft on Wednesday night.

Club sources said the deal will also involve North Melbourne, who will use the first selection in the draft to take Jason Horne-Francis, as they attempt to gain a pick in the 30s after their second selection at pick 20. 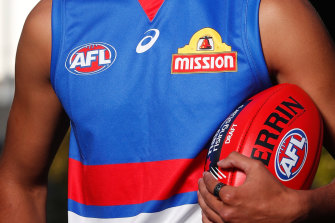 The Bulldogs are set to take part in a pick swap.Credit:Getty Images

G’day everyone and welcome to our 2021 AFL draft live blog on day one of the two-day selection event.

I’m Roy Ward and I’ll be leading our blog tonight while our reporters will have all the major moments from around the country.

South Australian midfielder Jason Horne-Francis is expected to be the No. 1 pick and make his way to North Melbourne while expect ruckman Sam Darcy and midfielder Nick Daicos to head to the Western Bulldogs and Collingwood Magpies respectively as father-son selections, what will be interesting is whether any other clubs bid for either player and force the Dogs or Pies to use the selections they have built up to cover such a bid.

The draft starts at 7pm. Enjoy the night to come and remember we will be blogging again tomorrow night for the concluding rounds of the draft.

Wallabies wing Taqele Naiyaravoro would love to play for Fiji