Reader poll: Who will win best on ground?

Not so mad Max: From footy nobody to standout captain

When he was 17 and a footy nobody at pre-draft camp, Fremantle asked Max Gawn how his then-girlfriend would handle a move across the Nullarbor. “She’ll be right,” he replied. “Her goal in life is to be a footballer’s wife.”

Twelve years later, he is in all ways a towering figure, the most distinctive and distinguished in the game, but he’s still Max Gawn. On Brownlow Medal night this week, former teammate Jack Fitzpatrick texted him to say he could win the Brownlow, the Norm Smith, and the title of drought-breaking premiership captain, too. 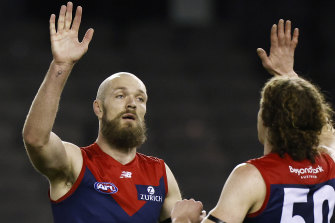 Listen: Will the Demons choke in the AFL grand final after 57-year drought?

Good afternoon everyone. It’s Roy Ward and welcome to our AFL grand final live blog. I’ll be joined over the day by Ronny Lerner and Daniella Miletic as we count down to first bounce on this momentum occasion of a first grand final in Perth.

We will have plenty of stories and action for you throughout today and tonight right through the post-game as the new premiers celebrate their victory.

Please feel free to leave a comment on the blog at any time and keep an eye out for our reader polls and other interactive posts.

First bounce is 7.15pm AEST, enjoy the day and night to come.