As a child of the 1970s some of my fondest memories involve the sights, sounds and smells of footy. High on that list was running onto the ground after the game.

Late in the last quarter we’d sneak down to the fence, hoping to pat players on the back as they left the field. My target was Richmond full-forward Michael Roach, whose name was proudly hand-sewn on the back of my duffle coat. 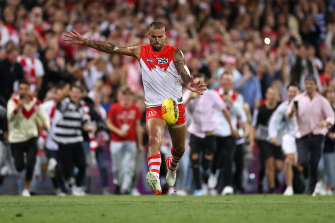 Lance Franklin kicks his 1000th goal during the match between the Swans and Geelong at the SCG. Credit:Getty

The thrill of planting your feet on the MCG, minutes after a game, was like finding the holy grail. We’d then stay for kick-to-kick, reliving goals Kevin Bartlett had kicked from impossible angles.

Everyone loved it and the only problems I remember were a stray footy to the head or a shoe full of putrid mud at Moorabbin. Ground access was eventually restricted, although we have seen kick-to-kick make a comeback, much to fans’ delight.

Friday night’s ground invasion when Sydney’s Lance “Buddy” Franklin kicked his 1000th goal was an incredible moment and a reminder of all that is great about footy. It was just so Australian.

Thousands streamed onto the SCG, mobile phone cameras in hand, to share the moment. It was chaotic and sparked some COVID-19 and safety fears for Franklin, his teammates, Geelong players and the crowd.

But the sentiment was overwhelmingly cheerful and carefree, and Franklin himself wasn’t scared.“I was lapping it up, to be honest with you,” he later said. 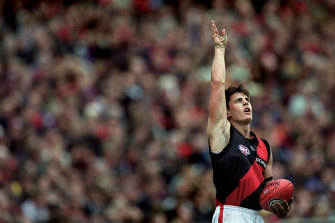 Essendon full forward Matthew Lloyd in 2001, one of the years he kicked 100 goals.Credit:Jack Atley

Former Essendon spearhead Matthew Lloyd was mobbed when he kicked 100 goals in 2000 and 2001. He says while he needed his wits about him and to keep his feet, it was “an amazing buzz”.

“It’s a great tradition,” he says, adding that Franklin handled himself extremely well. “This was amazing on a different level again, just what it could potentially do for kids and AFL footy in Sydney, where they’re always up against it.”

As Lloyd points out, Friday night galvanised everyone in footy – players, officials, and fans – at a time when the game needs a boost.

For two years we’ve had COVID-affected seasons and too many crowd-free games. Spectacles like Friday’s will hopefully encourage those who may still be hesitant, whether it’s due to COVID fears, complicated ticketing, scheduling, or public transport disruption, to pack the stands again.

It showed that nothing beats attending an AFL game and creating lifelong memories.

Richmond cheer squad member Sherryn Jarrett will always treasure running onto the MCG in 1980 with her sister Deb as a nine-year-old when Michael Roach kicked his 100th goal.

“Running on the ground and patting players on the back and kicking the footy after the siren was part of growing up,” she says.