The AFL has sent its chief financial strategist to conduct a report into the running of Greater Western Sydney following a funding dispute between the league and the club.

The struggling Giants – who have slumped to a 0-2 start to the season – have been stripped of close to $3 million in distribution money due to the AFL’s funding cuts from COVID-19.

The league has sent former total player payments boss Ray Gunston to western Sydney to conduct a report into the club’s business model. 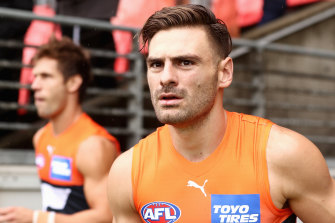 Gunston – former CEO of Essendon and prior to that CFO of the Tatts Group – is one of the most respected financial minds in the game.

His role has changed to infrastructure, investments and special projects at the AFL and he’s essentially used by the league as a consultant. He has spent the week at GWS.

While Gunston’s presence at the league’s youngest club is not a red flag – and has nothing to do with the Giants’ struggles on the field – his quiet journey to GWS had several club CEOs raise their eyebrows when the issue was brought up on a recent phone hook-up between club bosses.

According to sources familiar with conversations between the league and club, the main point of contention seems to be centred on the cost of living in Sydney and how the club continues to pay overs to its staff and players to stay.

Stephen Coniglio – the midfielder who was dropped in his first year as captain – is in the early stages of a seven-year deal with more than $1 million a season.

His teammate Josh Kelly – who has been in a form slump spanning more than a season – is in the final year of a contract where he has the option to extend it by a further eight years at $1 million a season.

“One of the things we’ve raised is that there are market differences that are so significant that they’ve almost become more pronounced for the football staff they’ve had to fit into the soft cap,” Giants CEO David Matthews said.

“In fact, some would argue those market differences have been magnified under the cuts.

“We discussed that with Ray and others at length this week.”

The AFL has told The Age and Sydney Morning Herald that the review of the club’s business model was agreed to at the end of last year and that Gunston’s report would be finalised in the near future. 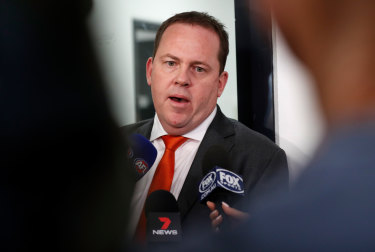 Matthews said that Gunston’s presence had been welcomed and conversations had been positive.

“We’d had a difficult year, shut out of playing games in Sydney and Canberra, we had a significant deficit at the end of last year,” he said.

“COVID, coupled with the fact that we are 10 years in as a club, it’s timely to have a look at things. It’s a logical process to work through.”

The club has again flagged the possibility of private ownership, pointing the AFL to successes in other sport, including the NRL.

The Giants have backing from a coterie group called M7, which includes about 25 American-based investors who support the Giants without seeking publicity.

On top of the financial discussions with the AFL, the league’s youngest club has also found itself under significant scrutiny in the early stages of the season.

Two losses from the opening two games has again put the spotlight on coach Leon Cameron, despite the fact his deal was extended by the Giants last year.

“We’ve got to get better, there’s no doubt about that,” Matthews said, “But there’s 20 games to go. It’s been a disappointing start but that’s not to say we’re not still positive about how the year can pan out.”

The AFL distributed a total of $231 million to clubs last year, which was a decrease of more than $83 million.

GWS received nearly $16 million of that, the third highest of any club behind Gold Coast and St Kilda.

‘We would cripple the game in this country’: Rennie says Wallabies must let Koroibete go