The AFL's free agency and trade period will begin on October 30, six days after the grand final , with the frenetic player movement period continuing over the Melbourne Cup weekend until Thursday November 12.

Clubs will look to reposition their lists in the most uncertain environment in the game's history, with list sizes and salary cap limits unclear until the CBA review is finished.

At a football managers meeting on Tuesday, clubs were told that any reduction of list sizes was likely to be gradual. 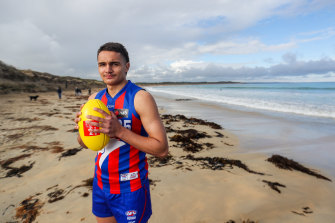 Clubs have been working on the assumption in recent months that the primary list will not go below 40, however, uncertainty will remain until the AFL and the Players' Association conclude the review, which is not expected to happen quickly.

The national draft will occur in the week starting on December 7, however, the AFL has not yet decided upon the format, with last year's national draft taking place over two consecutive nights.

This year's draft is likely to be heavily compromised with there likely to be around 20 northern academy and next generation academy graduates and father-son selections, including the highly touted Jamarra Ugle-Hagan, who is tied to the Western Bulldogs' NGA.

The bidding process will remain the same for 2020, however, it is to be reviewed, with the potential for clubs being banned from matching bids made inside the top 20 selections on next generation academy graduates.

Up to 20 clubs could be part of a second-tier competition on the Eastern seaboard that combines the NEAFL and VFL in 2021 and is being referred to as the VFL and East Coast competition.

Apart from the 14 AFL clubs, there are at least six standalone clubs that were part of the VFL and NEAFL competitions in 2019 whom may choose to become part of the expanded competition.

That decision is yet to be made as standalone clubs determine whether they can afford to be part of the competition and what their club's future might be if they aren't in a position to take part, while Victorian-based AFL clubs consider their preferred second tier structure given the constraints on spending due to the revised soft cap.

On Tuesday, club football managers were told that AFL clubs would not need to pay the licence fee to participate in the competition with clubs keen to negotiate other areas of expenditure such as interstate travel with the league.

The AFL expects to work with clubs to establish how non-AFL listed players are supported to play for clubs across the competition. Several Victorian-based AFL clubs are concerned at how they will access and integrate non-listed players into their second-tier teams, particularly when their opportunities to train together will be limited.

There is some disquiet among list managers at Victorian clubs about how the state league competitions will operate in 2021. However, the AFL has declared it a transition year as they work out a future structure that fulfills key criteria of talent development, competition and community connection.

Clubs were also told that no AFL players will be expected to return to training until at least Monday November 30 due to the season stretching into October and ongoing uncertainty around government restrictions relating to the coronavirus pandemic.