Richmond did as expected on Tuesday night, selecting Northern Knights star Ellie McKenzie with the first pick in the AFLW draft.

The explosive midfielder, who can also play forward, will bolster a side that finished winless in its first season in the national women's league. 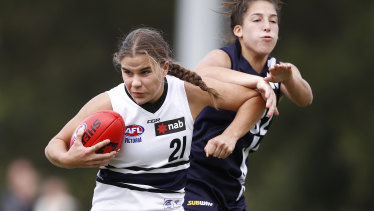 “She is just a beautiful kick of the football and a fantastic user of the ball,” Sheahan said.

“Her versatility and ability to run through the midfield is pretty handy, and she’s quite aggressive, we really like that.

“She is the sort of player we are looking for- someone that is not afraid to get their hands dirty but then on transition can run really hard and damage the opposition.

“There have only been the three games this year and she played well in all of them, but she is someone that has been setting the junior footy world alight for a long time and lots of people are aware of Ellie and her skill.”

Is Gareth Widdop heading back to the NRL?

Southampton only top-flight club NOT to join FA's new diversity code
Recent Posts
This website uses cookies to improve your user experience and to provide you with advertisements that are relevant to your interests. By continuing to browse the site you are agreeing to our use of cookies.Ok