Home » Rugby » AFLW v BBL: why the footy is the best show in town

The Australian summer: beaches, barbecues, cricket and the Australian Open. And to top it off the AFLW season kicks off on Friday.

As a former Melbourne Stars cricketer I keep an eye on how the boys go in the Big Bash League but find it a hassle getting to the games. Car parks are hard to come by, and during COVID-19 times, it’s a risk to take public transport. 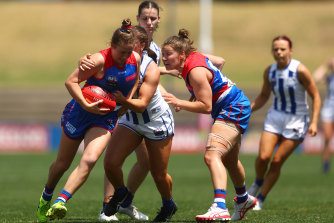 The Bulldogs’ Jessica Fitzgerald is tackled in a practice match.Credit:Getty Images

In Victoria, we’ve been starved of live sport, footy in particular, over the past two seasons, so what’s an easier alternative than going to a BBL game? Well, an AFLW match, of course.

And what’s not to love about the AFLW games, compared to going to a BBL match? They are played on suburban grounds, which allows you to feel closer to the action. You can hear the players calling out to each other. These suburban venues provide a community atmosphere that just can’t be replicated in the bigger stadiums.

For the nostalgic supporters, playing at these grounds brings back memories from when they were a kid and idolising the likes of Madden, Lockett, Dunstall or Kernahan. Now it’s the likes of Vescio, Blackburn, Pearce, Garner and Davey who are putting bums on seats.

It’s affordable, with tickets $10 for adults, half the price of a Big Bash game and free for kids under 18. Plus, games are short, so if your attention span is like mine it’s the perfect substitution for a Big Bash game or an Australian Open match, which can often finish late.

Wearing shorts and singlet to a game of footy, now that’s my idea of heaven.

The AFLW crowds are more friendly and welcoming. There’s no one yelling abuse and although you may occasionally hear the odd “open your eyes umpire”, it wouldn’t be an AFL game without that.

AFLW has prided itself as being a safe place for women, gender diverse and members of the LGBTIQA+ community to watch the games without fear of discrimination and abuse and this is borne out by the crowds at AFLW games. There are lots of young kids and families, the odd nana on a fold-up chair with her knitting, women’s VFL teams, long-time footy fans lamenting the fact that “if only this was around when I was their age” and young girls watching their idols and seeing what is possible for them.

And all these groups come together in friendship and fun, united in their love of the game. Like the BBL, there’s also lots to keep the non-footy mad kids entertained, with a great range of food trucks available at venues, kids’ activities, as well as fireworks and music.

And although the AFLW season is in the middle of summer, bringing its own challenges, the warmer weather is far better than a miserable rainy night game at the ’G, in the middle of winter. Wearing shorts and singlet to a game of footy, now that’s my idea of heaven.

And the game itself? It’s a tough, hard, contested style of footy that will provide you with pure enjoyment. You can hear the bumps, the tackles, and that crisp sound the ball makes as it connects perfectly with the foot. That’s the magic of a suburban ground. The fast pace of footy is why it’s a better alternative to a cricket match.

Then there’s the high-flying marks, the speed and power as players run down the wing or burst through a stoppage. There’s such a diverse range of athletic ability that makes AFLW so great.

And if that still not enough to get you to a game, it’s footy, why wouldn’t you watch it?

My Kangaroos take on Geelong at Arden Street Oval on Saturday; COVID has sidelined me for this week, but hope you can make it to the game!