Home » Rugby » After the ankle tap of a lifetime, Papalii is set to become a Raider for life

On the weekend, Ricky Stuart declared Josh Papalii would go down as one of the all-time great Canberra Raiders. Now the brilliant forward looks set to wear the famous lime green until at least the end of 2024.

Papalii's 60-metre sprint and then ankle tap on Gold Coast half Jamal Fogarty that denied a certain try on Saturday surprised everyone – except those within the Raiders. 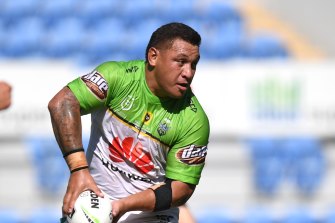 Josh Papalii is close to becoming a Raider for Life with a new extension.Credit:NRL Photos/Scott Davis

"If anyone deserves an extension at the moment at our club, it's Josh Papalii," Furner said.

"We've been working on the two-year extension for a while and it's progressing well. He's happy here and he wants the security."

Papalii's extension would take him through to 14 seasons in the nation's capital. Good mates Jarrod Croker and Wighton are also signed until the end of 2024.

Captain Croker said Papalii deserved any contract extension and the huge praise for his efforts during the win over the Titans. 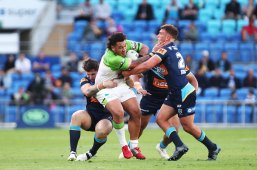 Get out of my way … Big Papa on the charge against the Gold Coast on Saturday.Credit:NRL Photos

"The most pleasing part was once 'Papa' ankle-tapped him [Fogarty], he bounced to his feet before anyone else and was ready to go again," Croker said.

"That just shows how much he wanted it and how much effort he was putting in.

"There wouldn't have been a single Raiders player who didn't go over and pat him on the back. It showed what it meant to us.

"Papa deserves all the recognition. He doesn't win all the fitness races at training, but he can play big minutes, and has done for a long time now.

"He'll go down as a club legend and play a lot of games for the club. He also has a lot of rep footy left in him, he's only 28."

Raiders' head of performance Nigel Ashley-Jones said Papalii played anywhere between 116kg to 120kg, which made his top speed against the Titans extra impressive. Papalii also had to work overtime on his weight "because of his metabolism".

"But he does all the extras and he's worked hard to keep his weight right," Ashley-Jones said. 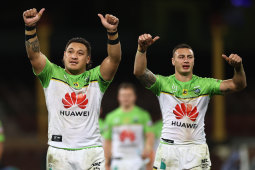 Thumbs up after another Raiders win.Credit:Getty

Stuart loved seeing Papalii put the foot down. Like so many horses he often backs, Stuart said of Papalii: "I was hoping Papa would get there."

The coach added he often watched Papalii kick goals from the sideline after training, and kick 30m field-goals right and left-footed.

"One of the most disappointing moments for Papa to this day is when he tried to kick a goal in his 200th against Melbourne, only to shank it,'' Stuart said.

"I'd never seen him so disappointed and embarrassed. He's actually a brilliant goal-kicker.

"He's Canberra through and through. Papa loves Canberra, he loves the jersey, he's what the club is about."

The Raiders host Canterbury on Sunday, without Corey Harawira-Naera as part of the agreement with his mid-year switch, before welcoming the Sydney Roosters – and Sonny Bill Williams – in the game that could go a long way to determining fourth place.

Papalii's efforts this year have been extra special given the number of injuries to so many key forwards, including Sia Soliola, Corey Horsburgh and Emre Guler.