So many bombs have been launched this week.

There was Ivan Cleary calling for kick protection for his son, then Wayne Bennett claiming Nathan Cleary was receiving illegal protection. Kaboom. Kaboom. Then both coaches launched a few more in their post-match press conferences. Yet the most damaging aerial assault was always going to come from the boot of Cleary junior.

They came in all shapes and forms; the floating, spiralling or end-over-end variety. This would have been an almost impossible task for the most seasoned custodian, let alone a rookie more at home at halfback.

But Blake Taaffe was up to the task. Save for the first bomb that came his way, Taaffe defused them all.

There was so much talk about Cleary’s kicking game, so it was somewhat surprising that Jarome Luai was the first Panther to put the boot to ball. From there, a familiar pattern emerged; the Panthers would reach the final tackle, the ball would go to Cleary and then Taaffe was targeted like a heat-seeking missile. The 22 year old muffed his first attempt, a miscued kick, but swallowed everything else that came his way.

When he rose above Stephen Crichton late in the match, and came down with the Steeden despite being tackled in mid air, it was one of the biggest plays of the game. 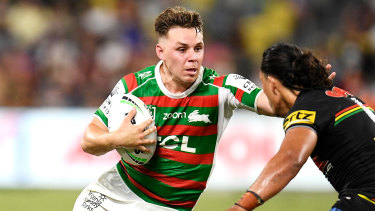 Blake Taaffe had a wobble early, but was calm under the high ball for the rest of the night.Credit:Getty

Taaffe wasn’t the only one under pressure when Cleary launched the Steeden. The match officials couldn’t have been oblivious to the media war waged between Bennett and Ivan Cleary. When Keaon Koloamatangi rushed up to put kick-pressure on the Blues No.7, he conceded a penalty. Andrew Johns, who knows what a late hit on a kicker looks like better than most, almost jumped out of the Nine commentary box in disbelief.

Both teams were missing their first-choice fullbacks when Dylan Edwards (foot injury) joined Latrell Mitchell on the sidelines. Both the replacements responded superbly; Crichton scored a try and ran for more metres than anyone else who played in this match or the one that preceded it in Townsville.

The playoffs began with almost everyone predicting the upcoming grand final will be contested by the same teams as the last one. When Melbourne made short work of Manly, the team seemingly the most likely to upset the status quo, there was nothing to suggest otherwise.

And then the Rabbitohs exploded out of the blocks to start the second half and everything changed. Having snatched the lead, they refused to relinquish it in what was Wayne Bennett’s 888th game in charge.

Some things change, while others stay the same. The Rabbitohs are through to their fourth consecutive preliminary final. They again won’t have Mitchell, but they will have every confidence his replacement can take them a step further.

The Panthers-Storm grand final won’t eventuate, with their anticipated clash potentially coming a week earlier. Sooner than expected, one of them will bomb out.