Four-time premiership coach Alastair Clarkson has been appointed as an advisor to the taskforce driving Tasmania’s bid for an AFL team.

The 53-year-old, who left for America last week, has been given a six-month contract to provide advice to the group as they develop their pitch to AFL presidents who will vote on the proposal next year. 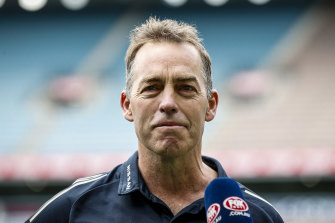 Alastair Clarkson will be an advisor to Tasmania’s AFL taskforce.Credit:Getty Images

Tasmanian Premier Peter Gutwein made the announcement in state parliament on Thursday, saying that Clarkson will provide assistance in developing a strategy for funding the new team, a proposed stadium in Hobart, state football pathways and talent identification as the taskforce creates a runway towards a standalone AFL team in Tasmania.

Mr Gutwein said Clarkson would be able to use his “existing knowledge and access to American sports teams” to recommend what an elite sporting facility housing the team should contain and described his appointment as an enormous step forward for the bid.

Carter’s report said a case did exist for a standalone team, a hybrid model or a relocation.

The AFL was put under pressure by Mr Gutwein, who threatened to remove state government funding for Hawthorn and North Melbourne to play games in Tasmania in 2022. The league then agreed to a timeline that would see the club presidents vote on the matter in 2022. The pitch will need to convince 14 AFL presidents to succeed, with the backing of the AFL Commission considered essential in the vote.

In September, Clarkson told SEN he was interested in helping the bid and would be open to coaching the team one day.

“Don’t be impatient, let’s just do it steadily and take five or six years to build up the grassroots, build the fabric of the club,” he said.

“Touch into the very fabric of the Tassie history. We don’t want to be a side that just limps into the competition and gets smacked in the first two or three years or first five years of existence.”