Alastair Clarkson has pulled the pin on his planned involvement in Friday night's state-of-origin bushfire relief match, opting instead to coach Hawthorn in their emergency services-themed practice match against St Kilda in Morwell.

Four-time premiership coach Clarkson was slated to be an assistant coach for Victoria, working on a coaching panel behind his close friend and dual Richmond premiership coach Damien Hardwick for Friday night's landmark game at Marvel Stadium. 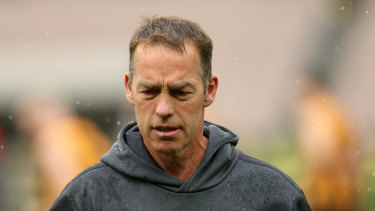 However since the origin match between Victoria and the All-Stars match was announced, the Hawks have organised a scratch match against the Saints in Gippsland on Friday afternoon, which will also raise funds for the bushfire effort.

Hawthorn confirmed to The Age on Monday that Clarkson decided he'd be better served joining the Hawks for their match against St Kilda, which comes eight days after Hawthorn lost to the Saints in the Marsh pre-season series opener at Moorabbin.

Clarkson spoke passionately about the re-build in bushfire-affected areas when questioned following the Moorabbin defeat to the Saints.

The coaching great and several Hawthorn players travelled last month to bushfire-affected areas in northern and eastern Victoria but Clarkson said he was determined to return to keep helping the towns that had been heavily hit.

“This isn’t something that’s going to be an overnight thing. We’ll be back up there again in the next couple of weeks to provide some more assistance and it’s going to be ongoing for six months, 12 months, it might even be two years before we genuinely see the full recovery take place,” Clarkson said.

“Within two weeks of us being there, the rain comes and outside you’ve seen burnt leaves and blackened trunks on trees and then the paddocks are green.

“That’s an obligation that we want to give – especially to those two communities.

"That area in mid-Gippsland and west Gippsland was our zone and where we recruited our players for a long, long time prior to the national competition and the draft.

“[Hawthorn premiership player] Xavier Ellis came from Lakes Entrance and it was when his father Geoff and the organisation that he worked for, an abalone company in Mallacoota, got burned to the ground, it was like ‘how can we come down and help?’"