Twelve months ago the Dragons players learned on the eve of the Charity Shield that Jack de Belin would be subjected to the NRL's no-fault stand-down rule. 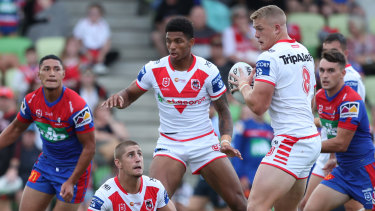 Eddie Blacker of the Dragons in action during their trial match against the Knights in Maitland.Credit:Getty

And when the Dragons returned there in round 10, de Belin lost his bid to have the same ban overturned in the Federal Court, which shattered his teammates, who were eventually thumped by Newcastle.

While de Belin, who has pleaded not guilty to charges of aggravated sexual assault, remains stood down and faces another season out of the game, McGregor and the Dragons are focused on a new campaign, and have a spring in their step after a weekend trial win over Newcastle in Maitland.

Zac Lomax, 20, made the seamless transition to the all-important fullback position, halves Ben Hunt and Corey Norman enjoyed their new roving roles, and Issac Luke will come straight into the No.9 jersey on Saturday night against his old club Souths.

The Dragons players will spend eight days on the road including the next three nights in Port Stephens before they cut back inland to Mudgee, where they will try to avoid losing an eighth straight Charity Shield. 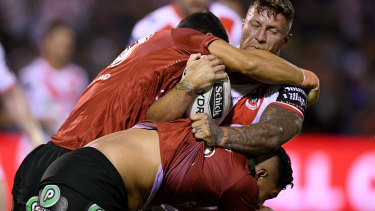 Tariq Sims gets hammered in the 2019 Charity Shield in Mudgee.Credit:AAP

"We're away for eight days now, which is a nice way to finish what has been a tough 15 weeks of pre-season," McGregor said after the Dragons' 38-12 defeat of the Knights.

"We'll have a week-long football camp where we will drive our culture and behaviour and standards. We're just getting together because we haven't had a camp due to people being away."

Despite losing skipper Cameron McInnes to a knee injury, Matt Dufty to a fractured cheekbone and Korbin Sims to a broken arm a week earlier at the Nines, McGregor was relieved no players were added to the casualty ward on the weekend. 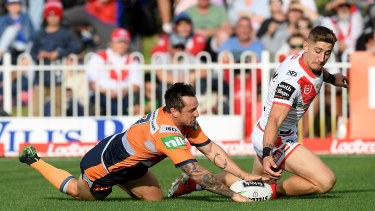 Mitchell Pearce of the Knights scores against the Dragons at Glen Willow Stadium in 2019.Credit:AAP

Trent Merrin has a hamstring twinge but is expected to make his Dragons' return against Souths, as will James Graham.

Tyson Frizell captained the Dragons against Newcastle and is a chance of doing so against Souths and the early rounds as McInnes recovers, but McGregor said that decision would be left to the leadership group.

Frizell's future beyond this season has been a hot topic, with Newcastle heavily linked to the international backrower.

McGregor did not want to put any more pressure on Frizell and said "he's got my support, whatever his decision is".

As for McInnes, the newly appointed captain said his left knee would remain in a brace another week and hoped his recovery time was closer to the forecast six weeks and not 12 weeks.

"I'll be doing everything I can to make it not 12 weeks," McInnes said. 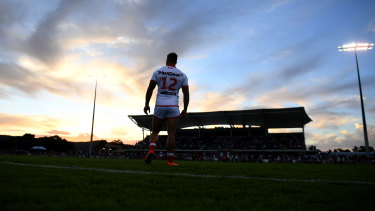 Sims in Mudgee before the 2019 Charity Shield match.Credit:AAP

"With the MCL it's how quickly your ligament scars. I'll be tested in another week or so and I'll know more then.

"I knew I had done something [at the Nines], I was able to defend the rest of the set and then run off. It was a bit loose and I knew it wasn't great.

"It's starting to get painful now which means it's healing. Because I ran off the field I thought it couldn't be too bad."

McInnes had already heard from Luke, the 32-year-old international who was thrown a late lifeline by the Dragons, and backed him to get the job done in his absence.

McGregor also liked the way former Souths hooker came on in the second half of the trial and straightened up his side's attack.

England are the Women's Rugby World Cup favs but can anyone stop them?