Home » Rugby » ‘An outstanding team’: Momirovski may have got better end of deal to leave Tigers

Paul Momirovski needed just a few hours at Penrith on Monday to realise he could end up the luckiest Tiger of all.

Momirovski was part of a historic swap deal last year with Harry Grant and the Melbourne Storm, where he played six games and was unlucky to miss out on selection in the grand final triumph. 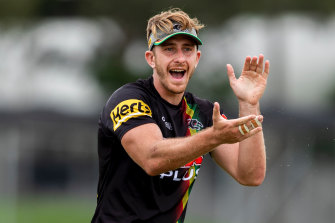 Now he has been traded by the Wests Tigers for a second season – this time heading to Penrith in a switch with Daine Laurie – and Momirovski believes it will be an excellent move.

The Panthers are tipped to go one better and win the competition in 2021 while his old club are looking to avoid a 10th straight year without finals.

“There is talent all over the park [at the Panthers], it’s an outstanding team. They’re young and hungry and after one day I’ve noticed everyone just comes in and does their job,” Momirovski told the Herald on Monday.

“There’s no complaining. They come in and do their work. It’s good. It’s a good environment. There are good signs … this is definitely a place that will be successful for a while.”

Momirovski confirmed he asked the Tigers for a release on more than one occasion over the summer when it became clear he was unlikely to start. Joey Leilua and James Roberts are expected to be the club’s starting centres, and there are high hopes for Tommy Talau. Even Moses Mbye is an option.

“Having conversations with the club and coaching staff and seeing where the club was at, I decided the best thing for me was to try and take up an opportunity elsewhere,” Momirovski said.

“It’s fine, clubs do their thing, it’s a business, there’s no bad blood. I left on good terms and there’s no spite or angst – it was a business decision that was best for both parties.”

Laurie was only on a development deal at Penrith but left for the chance to become the Tigers’ regular No.1. The Tigers are expected to pick up part of the tab for Momirovski this year as he thrashes it out for the right-centre position with Brent Naden and even Matt Burton.

When asked what made him think he was a better chance of playing centre at Penrith than at the Tigers, Momirovski said: “Just the internal conversations you have. There are also good people here around me who can help me get better as a player. Some of the allure was being around people you’re comfortable with and who you know can help improve you.”

Momirovski, 24, debuted for the Roosters as 18th man in their 2018 grand final win and signed to the Tigers when Ivan Cleary was still coach. By the time he arrived for pre-season training before the 2019 campaign, Cleary had controversially returned to the foot of the mountains.

Momirovski, who will continue to commute from the city each day, has no plans of making it five clubs in five years. He simply wants the chance to show his ability on a consistent basis.

“I thought about that [number of clubs] myself, but I’ve only ever made decisions based on opportunity,” he said.

Penrith’s Dean Whare is expected to be formally announced as a signing for Catalans in the Super League in the next 24 hours, but will continue training with the Panthers as he awaits a work visa. Zane Tetevano has continued to train out west while also awaiting a visa after signing with Leeds.