Home » Rugby » Andrew Johns: Why Talakai can be the answer for NSW

Thursday Night Footy sees the Brisbane Broncos taking on the Cronulla Sharks, but let’s not kid ourselves about where the focus will be: Kotoni Staggs versus Siosifa Talakai.

We were interviewing Staggs on Channel Nine after the Broncos’ win over the Bulldogs at Suncorp Stadium last week when I started flicking through my phone and realised the Broncos had the Sharks next up.

“I’ll give him a run for his money,” Staggs replied with a cheeky grin.

It was so refreshing to hear a player speak their mind and not care how it would be taken. 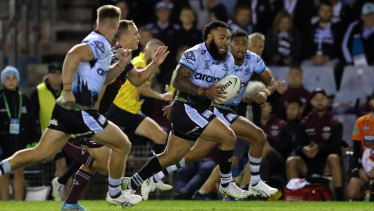 Talakai is a left-side dominant player, while most of the other players in contention, such as Staggs and the Dragons’ Zac Lomax, are right-side players. The Panthers’ Stephen Crichton can play both sides.

Talakai is up to his neck in selection because he plays in the middle, on the edge and at centre, as we’ve seen. That type of versatility goes a long way in Origin. 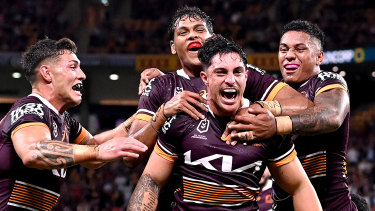 Kotoni Staggs will take on Siosifa Talakai in one of the clashes of the season on Thursday night.Credit:Getty

He and Staggs are near impossible to stop one-on-one. They are absolute powerhouses and have been in the Tongan squad together. When you come up against a mate, you go in even harder.

Theirs isn’t the only match-up I’m looking forward to: halves Adam Reynolds up against Nicho Hynes; wingers Selwyn Cobbo up against Ronaldo Mulitalo; and prop Payne Haas up against the whole Sharks pack.

I reckon the Sharks forward who will take on Haas is Toby Rudolf, who plays with high energy, is aggressive and totally mad: everything you want in a front-rower. He’s my favourite character in the NRL.

This shapes as a magic game.

You can always expect a fast track at Suncorp, so it will be open and played at speed.

The Broncos were on fire in the last 20 minutes against the Bulldogs. Their right-side attack of Kotoni and Cobbo is lethal, providing speed, power and skill.

The Sharks put on a clinic against Manly in the first half last week. In the second, however, they totally went to sleep.

Craig Fitzgibbon is a coach big on standards, especially in defence, so I reckon that would’ve been the focus of their preparation. 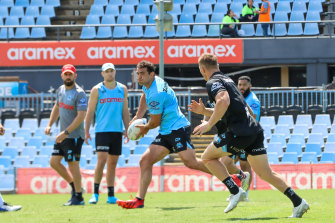 The big in for the Sharks is Dale Finucane, who returns from a head knock. He does all that hard work that few see, but his teammates do. Things like leading the speed of the defensive line, covering the inside and cleaning up any defensive errors.

With this in mind, I expect the Sharks to keep the Broncos to under 12 points.

MAN OF THE MATCH: Nicho Hynes.

There’s talk stirring about bringing in an 18th side when the next broadcast deal ends in 2027.

A conversation should start now then about bringing in a Pasifika team, based in Wellington in New Zealand, but also playing matches in Sydney’s west.

Wellington already has a large junior competition, and they can tap into the fans in that area.

But the big plus for a potential Pasifika side is its already got potential feeder clubs playing in Australia: the PNG Hunters in the Queensland Cup and a Fijian team, the Kaiviti Silktails, in the Ron Massey Cup in NSW.

We need a Pasifika team that can provide a pathway for players from Samoa, Tonga and the Cook Islands, where they mostly play rugby union. Players from these countries are the future of the game.

Cowboys rebuilding from within

The Cowboys have found their mojo. It’s great to see.

And they’ve done so because they have built from within. Players like Heilum Luki and Jeremiah Nanai have come through the system in North Queensland. As I understand it, the Cowboys have more just like them.

That’s the model for success: if you have a lot of juniors, like Penrith, it means more to play for that club because you come from the area.

Cowboys coach Todd Payten faces a big decision at fullback, although it’s a good headache to have.

Fullback Hamiso Tabuai-Fidow returns from injury, but Scott Drinkwater has been strong in his absence, providing flair and creativity.

Drinkwater could move into the halves, but two into three doesn’t work. Tom Dearden is considered a long-term halfback, so maybe Chad Townsend will be pushed out of the starting side.

We will get a greater indication of how North Queensland are tracking when they meet Parramatta on Saturday night.

It’s the biggest challenge they’ve faced but, based on how they are playing right now, it won’t surprise if they spring an upset.