With the big 1000-goal milestone no longer hanging over his head, Lance Franklin has set his sights on the only thing capable of topping it: a premiership with the Sydney Swans.

Franklin already has one grand final medal in his collection, from 2008 with Hawthorn, sitting in his trophy cabinet at home – soon to be joined by the Sherrin he kicked to join the AFL’s exclusive four-figure club, which is now back in his safe keeping. 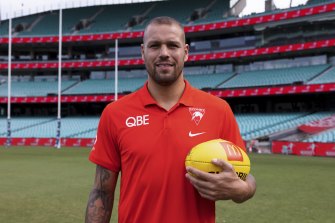 Lance Franklin with the ball he kicked, in almost the precise spot he kicked it, to bring up his 1000th career goal on Friday night at the SCG.Credit:Brook Mitchell

Buddy may yet move further up the all-time VFL/AFL goalscorers list, needing only 32 more goals to overtake Gary Ablett snr and 58 to jump Doug Wade into fourth place, behind Jason Dunstall, Gordon Coventry and Tony Lockett.

But the 35-year-old, who is in the final year of his contract but open to playing on in 2023 if his body lets him, has always prioritised team success over individual accolades and firmly believes the Swans, who are 2-0 to start the new season, are capable of going all the way.

“It’s pretty obvious, isn’t it? A premiership,” Franklin said when asked what was next on his to-do list after his four-goal haul on Friday night sparked a euphoric pitch invasion at the SCG.

“That’d be lovely, and that’s what I’ll be striving for this year. But we’ve got a lot of hard work ahead of us to achieve that. I’ll be doing my best to make sure that happens. 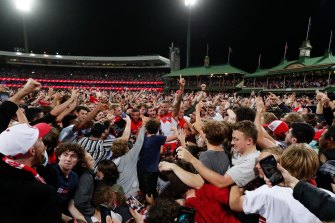 “Anything’s possible. We’ve got a really talented team, we’re obviously young but we’ve also got a mix of really experienced players that play really good football. Who knows? You need a little bit of luck along the way too. If we keep doing what we’re doing and keep improving, and not be happy with where we’re at, anything can happen.”

The pressure was on Franklin to get past 1000 goals against Geelong – not only with a packed partisan crowd of more than 35,000 willing him on but with his family having flown into Sydney from around the country and even overseas, after a fly-in visit over the weekend from his Los Angeles-based sister Bianca.

“I wanted to get it done as soon as I could,” he said.

“It was obviously perfect timing to get it done here at the SCG and to have my family come across from America, from Perth, Adelaide – I had a lot of family here. It was just a special moment to have those people who have been through everything with me, from the start of my career and for the last 18 years, it meant the world for me to have them here.”

Among the well-wishers was former Hawthorn coach Alastair Clarkson, who popped into the Swans rooms after the game wearing a red and white scarf.

“I never thought I’d see him wear a Swans scarf, but the support he’s given me throughout my career has been special,” Franklin said.

“Clarko coming down to the change rooms after the game was something I didn’t expect. That was an incredible moment, too. I’ve been lucky enough to only have two coaches – some guys play football for a long time and have five or six coaches. I’ve been blessed.”

Franklin said at no point during the crowd invasion of the SCG did he feel uncomfortable or in any sort of danger – even if his face told a different story at times during the 30-minute stoppage of play.

“I was lapping it up, to be honest with you. A little bit of carry-on,” he said.

“At no stage for me, personally, was I nervous or scared of the crowd. It was just a special moment, I absolutely loved it. A lot of the boys that were involved in it would have thought the same too. From where I was, everyone seemed to be in really good spirits and was happy.

“The people around me were always talking to me and making sure I was OK.”

Chris Robshaw to play for Barbarians against England in Twickenham farewell