As Brad Scott settles into his new role as the AFL’s general manager of football, the former North Melbourne coach turned administrator has much to think about.

His portfolio comprises areas such as umpiring, talent pathways, game analysis, the (mysterious) competition committee and the match review officer. With the latter, he will need to form a partnership with match review officer Michael Christian, should he decide the former Collingwood premiership star is still the man for the role. 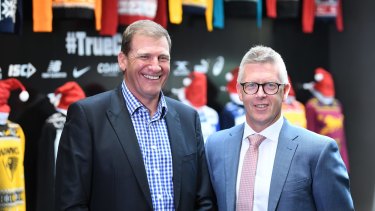 Christian was appointed the inaugural match review officer at the start of 2018 by then football operations boss Steve Hocking after the tribunal system was overhauled, replacing the match review panel in what was portrayed as a move to gain consistency in decision-making.

Hocking and Christian agreed it would likely be for a five-year term, with Christian having now completed four seasons. Industry sources say he is keen to continue at least for a fifth but has yet to meet with Scott. The AFL was contacted for comment.

It’s a role that by its very nature attracts considerable club and public attention. Judging by talkback radio, club supporters are more often than not unfavourable in their analysis. It can also become all-consuming for four days, particularly if there are a raft of incidents beginning in a Thursday night game. There is video to break down, discussions with football operations staff and considerable thinking time for what, if any, penalty should be handed down.

Christian also does not have the benefit of interviewing the impacted player or witnesses. And what he may base his call on can change within days, therefore sparking more public comment.

That was the case with Toby Greene’s elbow to the throat of Patrick Dangerfield in round 21. Christian gave Greene a two-match ban the day after Dangerfield had spent the night in hospital. Greene appealed and, by the time the case was heard, Dangerfield was back at training and ready to play. The suspension was cut to one match.

Under Christian, players are now left in no doubt as to where they stand on the bump. If they opt to bump rather than tackle and an opponent is hit in the head, punishment will come.

However, collisions can still split opinions. Hocking took the clash between St Kilda’s Hunter Clark, who had his jaw broken, and Adelaide’s David Mackay in round 13 out of Christian’s hands by sending the case straight to the tribunal. A league source said Christian would have been more than happy to adjudicate and was leaning towards clearing Mackay, but Hocking, as he later stated, felt Mackay had “acted carelessly and unreasonably in the circumstances”.

Mackay was cleared by the tribunal, a verdict that was eagerly anticipated because of its ramifications on the way the sport is played.

All parties admit there is still some “grey area” in terms of judging bumps and tackles, particularly if they lead to concussion or an associated head injury, and it will be interesting to see if Scott tightens the guidelines. There were some perceived inconsistencies last season.

Tom Hawkins was cleared by Christian for a tackle on Darragh Joyce in round 22 that left the Saint with concussion, yet on the same weekend Western Bulldog Zaine Cordy was charged with rough conduct for a dangerous tackle on Jacob Koschitzke, although the Hawk was not concussed and played on. Cordy was given a $2000 fine with an early plea.

There was also Nick Holman’s tackle on Mitch Duncan at GMHBA Stadium, which left the veteran Cat concussed. Despite Holman winning a free kick for holding the ball at the time, he was handed a two-match ban, only for it to be overturned by the tribunal.

For Scott and Christian, there is clearly much to think about.

NRL stars’ faces turn up on turf at Bankwest Stadium

Tigers preparing to fly to Sydney for Crows clash