Australia broke a 34-year hoodoo and took down the giants of men’s sevens, Fiji, with a historic 20-17 upset in Hong Kong on Sunday.

Not since a Bob Dwyer-coached side boasting the likes of David Campese, Michael Lynagh and Jeff Miller beat New Zealand in the final of the 1988 tournament has an Australian team claimed victory at the storied tournament on the world series circuit. 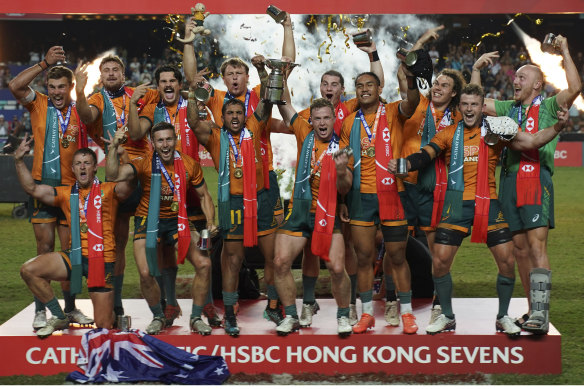 And it has been eight years since a nation has beaten Fiji in Hong Kong, such is the dominance of the back-to-back Olympic champions.

A dramatic try in the corner to Nathan Lawson sealed the historic win for John Manenti’s team, capping a seesawing campaign for Australia that featured come-from-behind and extra-time wins in the knockout rounds. It was a superb follow-up to their world series title last season.

“I’m struggling to put it into words,” Australian captain Nick Malouf told the broadcast. “I’m just so proud of our group. We did well last year and to come out here and back it up in the first one and win Hong Kong is, mate, I’m loving life.” 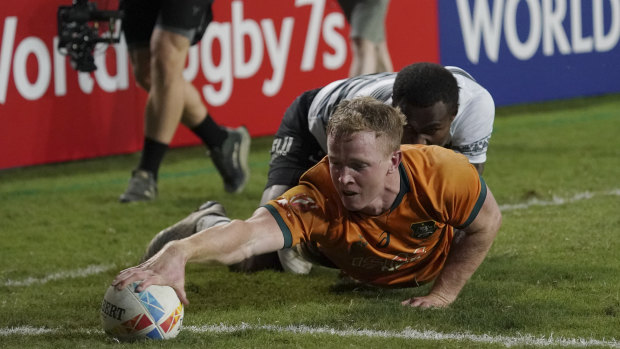 Henry Hutchison bagged two tries in a superb performance in the final against Fiji.Credit:AP

Australia trailed 12-0 four minutes in after tries to Fijians Josua Vakakuranabili and Waisea Nacuqu and 12-5 at half-time, but stayed in the fight and pounced twice when Fiji went down a player for a high tackle.

Another try to Nacuqu put Fiji ahead 17-10 but soon after Joseva Talacolo was shown a yellow card for a high shot on Australia’s Dietrich Roache. Hutchison’s second narrowed the gap to 17-15 and Lawson scored as the seconds wound down to seal the win. Ruck pressure from Longbottom forced the crucial turnover.

Earlier in the tournament the Australians dropped their pool game against Samoa but fought back from a three-tries-to-none deficit to beat Ireland in the quarter-finals. They beat France 10-7 in extra time to make it to the final, where few counted them any chance against the might and flair of Fiji.

“I can’t give my boys enough credit, our run into the final wasn’t the best, we got down to five people in the game, but we dug in deep for each other,” player of the final Longbottom said.

“It’s what we’ve been saying all week, get the history books out, we’re going to rewrite them. That’s a good start for us.”

Play or train: Bombers undecided on Smith, as Heppell calls for flair to remain