Rugby Australia and New Zealand Rugby have put their differences aside to agree on a new Super Rugby format.

Sources with knowledge of the discussions told the Herald the competition will revert to a format similar to the one in use before COVID-19.

The 12 franchises will face each other once before playing three additional round-robin matches. After a 14-game regular season, the top eight will progress to knockout quarter-finals.

First will play eighth, second will play seventh, third will play sixth and fourth will play fifth. The higher-ranked team in each fixture will earn the right to play in front of their home fans. There will be no second chance for the top four sides, as is customary in the AFL and NRL.

One of the remaining sticking points before the format is officially revealed later this week is how RA and NZR determine the additional three fixtures.

While RA want the additional matches to be derbies, the results of trans-Tasman Super Rugby indicate that option would provide an unfair advantage for Australian sides. 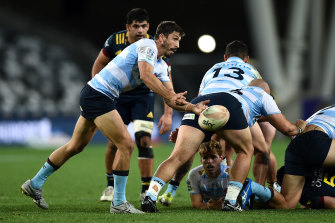 Super Rugby will go back to the future next season.Credit:Getty

Another option that has been discussed is a random selection of one team from the top third, middle third and bottom third of this year’s trans-Tasman Super Rugby ladder.

The other alternative is a completely random selection, but this would leave some teams playing the top sides twice while others only have to face those same elite teams once.

While the format of Super Rugby is all but set, both the final Bledisloe Cup and where the remainder of The Rugby Championship will be played is still yet to be determined.

The chief executives of the four SANZAAR nations met via Zoom on Monday evening.

RA was hopeful of taking a concrete answer on whether Queensland was a viable option to host the tournament into the meeting, but the government did not provide official confirmation by close of business.

While no confirmation had arrived in RA chief executive Andy Marinos’ inbox, a source with knowledge of the situation told the Herald Annastacia Palaszczuk’s government was ‘moving heaven and earth’ to ensure the tournament could be played in the Sunshine State.

RA has secured venues for the tournament but are yet to be given the green light to host the Springboks and Pumas in ‘managed isolation’, which would allow the two teams to train while completing their 14-day quarantine period.

RA need an answer from the Queensland government in the next 48 hours, as South Africa and Argentina need to be in Australia by Friday to complete their quarantine before the first Test in Australia, on the weekend of September 11 and 12.

The governing body is confident the tournament will have the support of South Africa and Argentina and be played in Australia if they do secure permission from the Queensland government, despite New Zealand’s preference to play the tournament on neutral – and more profitable – ground in Europe.