Shattered Australian women’s sevens star and AFLW player Chloe Dalton has announced her Tokyo Olympic dream is over due to a fractured cheekbone.

The 2016 Rio gold medallist, who had a stint in the AFLW with Carlton during 2019 and 2020, posted a heart-breaking message on social media on Thursday afternoon. 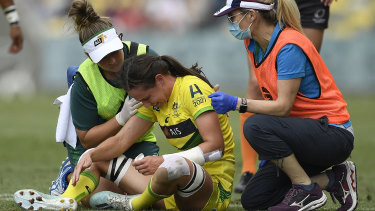 Chloe Dalton receives treatment after being injured during the Oceania Sevens. Credit:Getty

After making a comeback earlier this year from back surgery, Dalton suffered a nasty knock to her face in the Oceania Sevens tournament last week, putting her Olympic campaign in jeopardy.

The 27-year-old confirmed the severity of the injury just two days out from Australia’s Olympic team announcement on Saturday.

“Sitting here writing this with tears rolling down my cheeks wishing I was writing a completely different message,” Dalton wrote on Instagram.

“During our tournament last weekend in Townsville, I fractured my cheek bone in multiple places. After spending the week isolated in a hospital room in Townsville, I’ll head in for surgery this afternoon to have plates put in to my face.

“Unfortunately, there won’t be enough time to recover safely in time for Tokyo.

“Writing these words down is absolutely devastating and makes it all feel so much more real. This past 18 months have been some of the most challenging in my life, and I’ve overcome so many mental and physical battles to get to this point. Sport can be so beautiful and so cruel all at the same time. 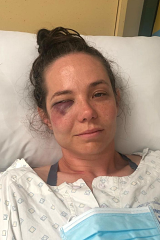 “Come the end of the month, I’ll be cheering my lungs out for my incredible teammates going over to Tokyo to represent our beautiful country. I couldn’t be more proud of the work that this group has put in every single day throughout some incredibly uncertain times. These girls are the elite of the elite, and it has been such a huge honour to be back playing alongside them.”

Dalton’s strong kicking game improved during her 16-game stint for the Blues across 2019 and 2020 in the AFLW and helped during her return to rugby.

She has signed a contract with the GWS Giants for the 2022 AFLW season.

Dalton said in May another gold medal would have been the highlight of her career.

“I think that would have to be up the top if we could go back-to-back gold. That would be absolutely incredible,” Dalton said. “I’ve looked up to so many athletes who have been to multiple Olympics and had success. Two would be amazing.”

Australia’s women’s side face an uphill battle to defend their gold medal after New Zealand’s strong performances in recent years.