Three-time premiership star Jack Gunston has had a relapse with his back injury and faces another stint on the sidelines.

Gunston, 29, returned to the side for the first time this season a fortnight ago against St Kilda but was a late withdrawal against the West Coast Eagles because of back spasms. 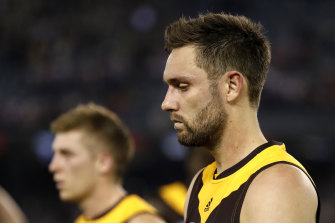 Jack Gunston has had back issues.Credit:Getty Images

That Luke Breust is the only goal-kicker with a double-figure return (12) highlights the troubles the Hawks, with a 2-6 win-loss record, have had inside attacking 50 without Gunston.

Jacob Koschitzke (nine) continues to develop but was goalless last week, while supporters are still waiting for Mitch Lewis (eight), off contract at the end of the season, to become a consistent threat.

Prime mover Jaeger O’Meara will return, having missed the past fortnight because of a hip and groin issue. O’Meara had been in excellent touch, averaging 28.5 disposals per game, and his run is needed.

“He had been really close the last couple of weeks. He just had some groin and hip discomfort coming out of the game two weeks ago against Adelaide,” Clarkson said.

“We thought it was going to settle really quickly but it was just one of those ones where it didn’t settle as quickly as we would have liked.“

Veteran Shaun Burgoyne will also miss another week because of a “light” syndesmosis ankle injury but ruckman Jon Ceglar is set to be available after an ankle complaint.

The Kangaroos may have not tasted victory this season but they pushed Collingwood at times last week, and have exciting young talent, including slick midfielder Tom Powell, emerging.

“They have been really competitive. They and us both played Melbourne in the last two or three weeks and both sides were in front at half-time,” Clarkson said.

The Hawks had hoped to be included in the AFLW competition from December 2022 but the AFL Commission has opted to seek submissions for the four vacant positions.

Hawks’ president Jeff Kennett has threatened legal action over the snub, while Clarkson said on Friday the club had made great strides in its VFLW program, particularly with amenities.

“We are ready. We have invested heavily in women’s footy … that [AFLW licence] will come in time. We hope it’s quicker than what they [the AFL] have stated but we will continue to bang the door down,” he said.

The Hawks say they are “well placed” to present a submission to the AFL. The VFLW Hawks, who will host North Melbourne at Box Hill City Oval on Sunday, won the premiership in 2018 and this year, under coach Bec Goddard, have become the first club to have an all-female coaching set-up.

‘It’s a big loss for him’: Junior footy postponement a social blow

France vs Ireland live stream: How to watch Six Nations online and on TV today