Home » Rugby » ‘Back to himself’: Swans’ McCartin feeling fine after concussion scare

Paddy McCartin was not reporting concussion symptoms after Sydney’s victory over Hawthorn despite failing a concussion test and being subbed out of the game.

The news is a huge relief for the Swans and McCartin, who has been one of the recruits of the season in a new role in defence after his career at St Kilda was cut short by multiple concussions.

The 2014 No.1 draft pick will miss this week’s heavyweight game against Brisbane in accordance with the league’s protocols, but it is a small price to pay given his injury record.

McCartin cut a forlorn figure in the rooms after his match was cut short, but teammates reported he was in much better spirits after the game.

Such is the impact McCartin has made this season as an intercept-marking defender that his absence will be a big blow for the Swans, who take on the high-flying Lions on Sunday at the SCG.

“He was feeling really well after the game, which was really positive,” Swans defender Jake Lloyd said on SEN. “He was back to himself, a little bit more shock with Paddy. 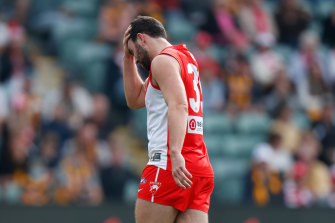 Patrick McCartin failed a concussion test in the Swans’ win over Hawthorn.Credit:AFL Photos via Getty Images

“For him to be back to himself feeling fine after the game, had no concussion symptoms at all was really positive. I think he failed the test which is pretty easy to do for anyone, it’s what you have to do these days.

“He’ll miss this week, but he’s been a key player for us in defence. He’s changed our style the way we can support each other in the air down back. We’ll miss him this week but its great he’s feeling well.”

McCartin suffered an accidental knee to the head during the Swans’ impressive come-from-behind victory against the Hawks in Launceston on Monday. Swans coach John Longmire said after the match that the club’s medical staff were taking an “ultra-conservative” approach.

McCartin played just 35 games for St Kilda before being delisted at the end of 2019, suffering eight concussions between 2015 and the pre-season of 2019.

He joined his younger brother Tom at the Swans after signing on with the club as a delisted free agent following impressive performances for Sydney’s East Coast VFL side last season.

Sports medicine specialist Dr Peter Brukner is hopeful this latest episode is only a “hiccup.”

“He was seen by a very, very experienced doctor,” said Dr Brukner, who has worked with a wide range of professional sports including AFL teams Melbourne and Collingwood and Cricket Australia.

“Sharron Flahive was the Waratahs’ doctor for 20 years, so she’s seen a lot of concussions and felt that he shouldn’t go back on, so we have to respect that.

“I’m sure he will be given additional tests given his history, then he and the medical staff will make a decision as to when he can continue.

“Hopefully it’s just a one-off hiccup, but there’s always concern about multiple concussions. We don’t really know what the long-term effects are.

“It’s a tough one. I feel for him. He’s finally got back to playing after all this time and then this happens. We’re being far more cautious now than we used to be for any concussion.

“The default is now, ‘Keep them off is there if any doubt at all’. If you’re in doubt, keep them out, then there is an additional layer of caution given his history.

“There was a lot of debate initially about whether he should come back to playing football given the number of concussions he had.

“You get the best medical advice with the knowledge we now have, you get all the tests done you can, then you make an informed decision.

“They’ll be super cautious about his situation but from what I saw yesterday his symptoms certainly didn’t appear to be severe. It makes me optimistic that he had minimal symptoms and should recover pretty quickly.”