Sydney has launched a bid to host the iconic Queen’s Birthday game at the SCG after coming to the AFL’s rescue this week.

The SCG has emerged as a contender to stage the traditional clash between Melbourne and Collingwood, also known as the Big Freeze at the ’G, should the MCG remain unavailable due to Victoria’s coronavirus outbreak. 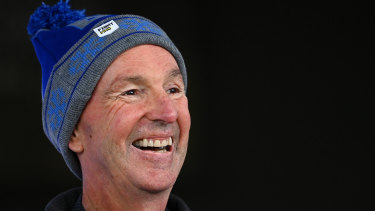 This year’s Big Freeze game, championed by the inspirational Neale Daniher, could be moved to Sydney or Adelaide.Credit:Getty

Venues NSW chairman Tony Shepherd has told the AFL of the desire to stage the Queen’s Birthday game if it were to be moved.

“We would be happy to host it should the MCG not be available,” Shepherd, also the Greater Western Sydney chairman, told The Age and the Herald.

Though Sydneysiders are not known for attending AFL games that do not involve the Swans or the Giants, this is no ordinary home-and-away match.

In the pre-game, football identities in costumes ride down a slide into freezing water to raise money in the fight against motor neurone disease. Daniher, a former Essendon captain and club champion and the Demons coach for 10 years, was diagnosed with the disease in 2013. Sufferers have an average life expectancy of 27 months from diagnosis.

In a big boost to the code in NSW, Sydney will host three of the six games in round 12 though it remains to be seen if the city’s football community will come to the party.

Highlighting the challenge for the AFL north of the Murray River, there is a strong chance the Dreamtime game in Perth will attract a higher crowd than all three games this weekend in Sydney.

Swans officials, having seen what was achieved in Perth with early notice, are privately miffed they were made to wait until Tuesday night before they could notify their members of the change. Tickets for the games did not go on sale to the public until Wednesday afternoon.

The AFL was still finalising marketing and promotion plans for this week’s games on Wednesday.

Despite the importance of the game between ladder leaders Melbourne and third-placed Brisbane, it is likely to be played before a meagre crowd at Giants Stadium on Friday night.

The league will be hoping there are more people like AFL converts David Mack and Richard Kolodziej, who have said they will attend the game. Both men were among the 4236 who watched the Richmond-Adelaide game last week.

“People like me who like watching a good game of footy, first versus third, that would be a very exciting game,” Kolodziej, 67, from Georges Hall, said.

“There was a time in my life when I thought rugby league was the greatest game in the world. These days I’ve swapped allegiances, I’m a true convert.”

NRL: More needs to be done after Addin Fonua-Blake spray