Exciting key position prospect Mac Andrew has bulked up ahead of the draft in a bid to be ready for the rigours of AFL.

The 200-centimetre ruck-forward is likely to be snapped up within the first 10 picks after a head-turning season, but was initially viewed as a project player, having weighed in at only 70 kilograms earlier in the year. 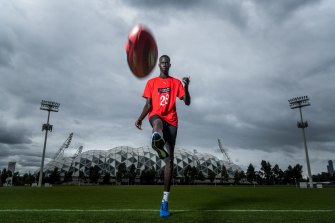 Mac Andrew has put on 10 kilograms as part of a breakout season ahead of the draft.Credit:Justin McManus

His work with weights as well as a diet of chicken and pasta, however, has placed Andrew, who is also a member of Melbourne’s Next Generation academy, on a path to AFL readiness.

“I’m still pretty light, but Melbourne, they gave me a [weights] program to do and I reached out to the nutritionists that they’ve got. The [Dandenong] Stingrays as well, I’ve got a lot of people helping me with it.”

The 18-year-old’s rise has become Melbourne’s downfall, as the Demons cannot match a top-20 bid under revised academy rules. Melbourne might have fancied their chances of snaring Andrew last pre-season, but a campaign in which he flexed his freakish athleticism on multiple occasions swiftly pushed the prospect out of red-and-blue reach. Despite this, the Demons remained supportive. 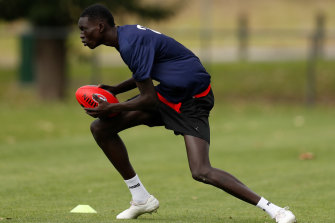 Andrew in action during AFL Academy training in April.Credit:AFL Photos

“Nah, nah,” Andrew laughed, when quizzed on whether Melbourne ever told him to slow down. “I’ve had a few jokes about that, but they were really supportive with the way I was performing. They just told me they liked what I was doing and to keep going. They never told me to ease back.”

It was a rise so rapid that even Andrew was at a loss to explain it.

“I don’t really know where it came from,” he said. “I think I was just going out and trying to play the way I know I can play, and people started to take note of it a bit. I was just trying to play to my strengths and do what I do best.”

Greater Western Sydney have shown particular interest in the Dandenong product due to their need for key-position depth. The Giants currently hold pick two, but may opt to trade the selection given Andrew is likely to remain available by the mid-range of the top 10.

Andrew expects to commence his career as a forward.

“When I put on a bit more size, I could probably go into the ruck a bit more,” he explained. “But for me, probably more so as a forward-ruck, playing up forward and pinch-hitting in the ruck when they need me to.”

The smooth-moving tall prides himself on his ability to act as a fourth midfielder. Following ruck contests, he is known to crumb his own hitouts, speed away from opposition onballers and advance the ball forward with his rare big-man kicking skills.

“I like to follow up after I do my ruck taps, and try to help out my midfielders as much as I can, whether that’s on the ground or in the air. My follow-up work is something I really take pride in. I feel like it’s a real strength of my game,” he said.

The Egyptian-born Andrew, whose parents fled war-torn South Sudan, was particularly moved by Majak Daw as a junior. Now, he is eager to use his football platform to inspire the next generation.

“Especially Majak, I grew up watching him as a kid and you just think, ‘I want to do that same thing’, but now to think I could inspire other kids to play, it is kind of crazy.”