Harry Wilson did not take part in yesterday's captain's run.

The promising back rower suffered a bout of gastro but has been given the all clear to play this afternoon. 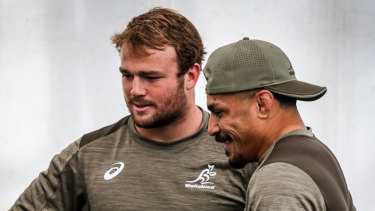 Wilson may be good to go but All Blacks star Rieko Ioane has been a late omission for the home side.

Ioane was benched after he bombed a try this time last week. Peter Umaga-Jensen comes onto the bench in his place.

The curse of Eden Park

The Wallabies arrive at Eden Park with full knowledge it is world rugby's greatest graveyard.

The All Blacks have not lost at the Auckland ground since 1994. A fair share of the current Wallabies weren't even born in 1994. 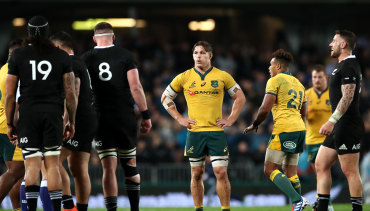 Australia haven't beaten the Kiwis at the ground since 1986. It's been the ground at which many a Wallabies thrashing has taken place in the 34 years since.

Matt To'omua has been on the end of a few of those thrashings. We sat down with the playmaker this week to talk about leaving a legacy in the gold jersey.

Hello and welcome to the Herald's live blog of the second Bledisloe Cup Test.

Sam Phillips here in the hot seat with you.

Keep it tuned to this page for instant updates, highlights, reaction and everything in between.