Essendon great Tim Watson says the Bombers “don’t need a saviour” to coach the embattled powerhouse after former coach and champion James Hird was interviewed for the position.

Speaking on SEN on Thursday morning, Watson said Hird was entitled to put his hand up for the role, but he would be “more than surprised” if Hird was selected as senior coach given the baggage of his previous reign at the club, engulfed by the supplements saga.

“I’m not surprised at all that they would interview him if he had put his hand up and said ‘yes, I do want to be interviewed, I do want to go through the process’,” said Watson.

“Let’s say Essendon is broken, what would unite a club will be success.

“It doesn’t have to come from James Hird being the coach of the Essendon Football Club to unite Essendon. The club would’ve been united under Ben Rutten and John Worsfold had they been more successful.

Hird was interviewed on the same day as Melbourne assistant Adem Yze, who also applied for the Greater Western Sydney job which was won by Adam Kingsley, and St Kilda assistant Brendon Lade.

Hird hasn’t worked as a coach since 2015, after the supplements saga that resulted in the suspension of 34 players and long-term damaging effects for the Bombers on and off the field. Recently, he has come back to the AFL and was working part-time as an assistant coach at Greater Western Sydney this year.

Watson said if given the role, Hird’s presence would dredge up the club’s past controversy. 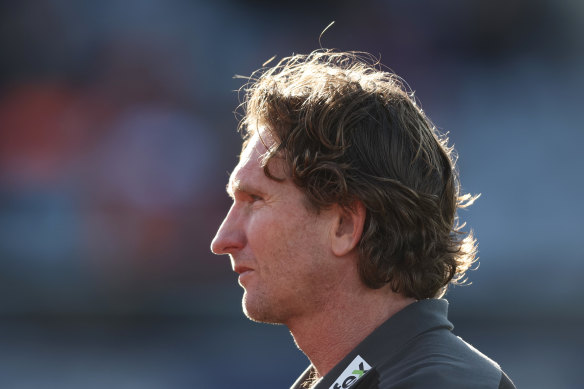 James Hird has applied for the Essendon coaching position.Credit:AFL Photos

“I think for a lot of people it would drag back all those things that happened and occurred, you know.

“He would’ve known what this would’ve attracted, once it became public knowledge, he would’ve known it puts him right out there in the conversation again, which he has wanted to shy away from and avoid for a long time.

“I’d be more than surprised if he ended up being the coach of this football club, but I’m happy for him to be part of the process and for him to have the courage to put his hand up and even go through it.

“My thoughts on all of this is that you go through a process and if it’s set up correctly, they ask the right questions, then you end up with the best candidate,” Watson said. “We’ve seen that in more recent times like Craig McCrae got spat out of the Collingwood process.

“If you bring in all those potential coaches, ultimately you should end up with the best candidates. Out of all this, it may end up being James Hird, who knows?”