People are jumping up and down about the changes NSW coach Brad Fittler has made to his side for Origin II.

To me, it shows strength. Freddy is a strong believer in himself and his team. Nothing’s changed.

He also knows he’s been in this situation before and dug himself out of it.

In 2019, he made mass changes after the 18-14 loss to Queensland in game one, including dropping Cody Walker, Latrell Mitchell and Angus Crichton.

It was the right call. In game two, also in Perth, the Blues won 38-6 before claiming the series with 26-20 in Sydney with a try to James Tedesco in the last minute.

So he’s done it before and he can do it again. 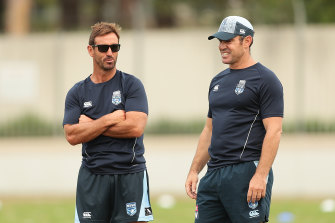 The Blues can get the job done. This is a better, well-balanced team, mostly because it allows them to dominate the middle and the ruck as Queensland did.

Jake Trbojevic is a big inclusion in the front row. Defensively, he’ll clean up the middle and hopefully counter Queensland’s Ben Hunt and Harry Grant working out of dummy-half.

So is Penrith’s Api Koroisau. His combination with Damien Cook can be a masterstroke.

The Maroons did a lot right in game one, but the most important thing was they won the ruck.

They slowed down NSW, limiting Nathan Cleary, Isaah Yeo and Jarome Luai. And, off the back of that, they pressured Cleary’s kicking game.

On the flipside, Queensland halves Cameron Munster and Daly Cherry-Evans had time and space against a fatigued NSW middle.

Munster produced a Wally Lewis-like performance — the highest accolade there is for a Queenslander.

The NSW middle men of Junior Paulo, Payne Haas and Reagan Campbell-Gillard were too big.

I thought it would be the Blues’ greatest strength but, failing to get a decent share of possession, it became their greatest weakness. 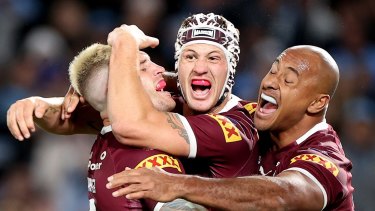 The Maroons drew first blood in the Origin series.Credit:Getty

In Origin I, there were 70 extra play-the-balls compared to a regular NRL game. If you think that’s easy, go outside and do 35 10-metre intervals and see how much you’re dragging your backside.

This stat shows that only certain people can play Origin. It tests you physically and mentally because the intensity never stops.

Starting Cameron Murray, along with Trbojevic, gives the Blues more agility in the middle, meaning they can speed up the defensive line.

Those two will also help tighten the marker defence, which was another area of concern in game one.

Queensland got us with the one-two punch of Grant and Hunt in. Now, NSW can combat it because they have Koroisau.

The best representative teams in which I played had both Danny Buderus and Craig Wing working together out of dummy-half.

Attacking out of dummy-half puts less pressure on the halves. For NSW, it also takes pressure of Yeo.

Watch for Koroisau and Cook and work more with fullback James Tedesco.

The selection of Matt Burton at left centre means Stephen Crichton will shift to right — but mostly it helps Cleary.

He gives Cleary that kicking option down the left side, as he did for Penrith last year when they won the NRL premiership.

In game one, Cleary produced 20 kicks for NSW while Luai did two. For the Maroons, Cherry-Evans did 13 kicks while Munster had nine.

Burton can be the foil that Cleary was missing in game one.

When players such as Cameron Smith, Billy Slater and Greg Inglis retired, there was a lot of talk about where the next generation of superstars would come from.

It didn’t take long. This is the Maroons’ best team since all the champions retired.

A hard-working pack, with stars in the spine and coming off the bench, spells trouble for NSW.

After the game one, Nathan Cleary said, “Origin is about stopping tries and Queensland stopped more.”

Valentine Holmes did it several times. He’s back to his best form.

Coming off the bench, Pat Carrigan was almost man of the match and would’ve been if not for Munster.

He’s a truly elite player who will be a Queensland and maybe Australian captain of the future.

The only knock I can put on Queensland heading into Origin II is wingers Selwyn Cobbo and Murray Taulagi are inexperienced, but they have the temperament to handle it.

Cobbo handled everything thrown at him in game one.

NSW will be stung by the result in the first game.

The ruck defence of Trbojevic and Murray, along with their marker defence, will help.

I’m tipping another epic like game one but with a different result.

Watch the State of Origin exclusively live and free on Channel 9 and 9Now.