Luke Brooks has been handed a stay of execution by coach Brett Kimmorley, who has emerged as the leading contender for the vacant Wests Tigers head coaching role for next season.

Sources with knowledge of the situation told the Herald the club has been impressed by the way Kimmorley has gone about his job since the sacking of Michael Maguire, despite the run of losses continuing under his watch.

It comes as South Sydney, who will this week announce a new three-year deal for boom prop Davvy Moale, prepare to meet with club legend Sam Burgess.

The Rabbitohs have organised to catch-up with Burgess in Sydney later this week to convince him not to sign a coaching contract with Wayne Bennett and the Dolphins – hopeful of making a job available to him at Souths next year.

With the Tigers set to begin a round of interviews for the vacant coaching role, Kimmorley starts the process in the box seat given his position as interim coach.

The club has been impressed with his methodology and want to see indicators of improvement from the team in the coming weeks. 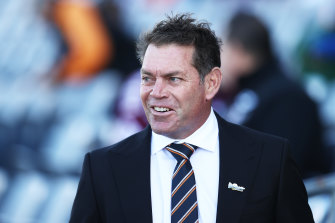 Brett Kimmorley is in the box seat for the Tigers job.Credit:Getty

Michael Potter has managed to get a lift out of the Bulldogs in his short time as Trent Barrett’s successor, with a similar impact from Kimmorley at the Wests Tigers likely to catapult the former halfback into favouritism.

He has been encouraged to look to the future. The Herald has been told a rookie player is in line to make his debut against the New Zealand Warriors on Sunday with the team to be confirmed on Tuesday.

Brooks is set to be named in the halves alongside Jackson Hastings for the game. There were reports last week that Brooks was about to be axed from the Tigers after a number of disappointing performances, however Kimmorley will hand the halfback another chance at redemption when his side crossed the ditch to try and spoil the Warriors’ homecoming.

A sell-out crowd will be in attendance at Mt Smart Stadium in Auckland on Sunday afternoon, with all eyes on Brooks as he looks to save his career at the embattled club.

The Wests Tigers, who were unable to lure Cameron Ciraldo on a lucrative five-year deal, have now turned their attention to finding another coach.

Kimmorley is the frontrunner ahead of the likes of John Morris, Shane Flanagan and Krisitan Woolf. The club will spend the week preparing to interview candidates.

Meanwhile, St George Illawarra captain Ben Hunt picked up an ankle injury in Origin II but the Dragons are confident he will be fit to play against Canberra in Wollongong on Sunday.

Blues prop Payne Haas had scans on an ankle injury he picked up in Perth and is in some doubt for the Broncos, who are relying on Adam Reynolds to get through a fitness test later this week to confirm his place in the side to take on the Cowboys.