Home » Rugby » Bulldogs down the Hawks then face nervous wait

The Western Bulldogs overcame a second-quarter deficit to down Hawthorn on Sunday and then faced a nervous couple of hours to find out whether their 23-point victory was enough for them to pinch a last-ditch finals berth.

Grand finalists last year but only able to finish three rounds inside the top eight this year, the Bulldogs ended the minor round with a 12-10 record and a 108.9 percentage, which would be enough to secure a finals berth should Collingwood beat Carlton in their Sunday clash at the MCG. 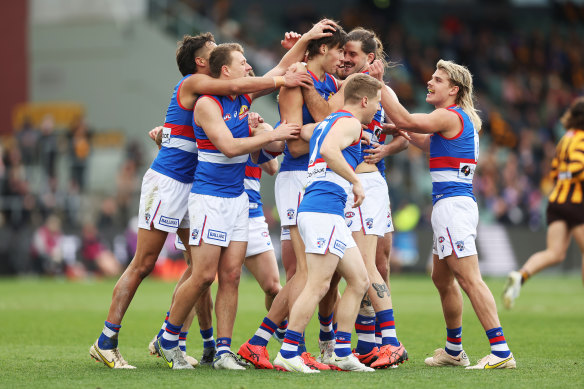 If the Dogs do remain there, they have history on their side – namely the drought-breaking 2016 premiership and last year’s grand final – of inflicting September damage from the bottom rungs of the eight in the Luke Beveridge era.

Weight of numbers eventually paved the path to victory for the Bulldogs, who endured prolonged bouts of inefficiency and inaccuracy before finally wearing the Hawks down.

The Dogs found themselves 18 points in arrears early in the second term at UTAS Stadium in Launceston, despite dominating both the contest and the territory early. 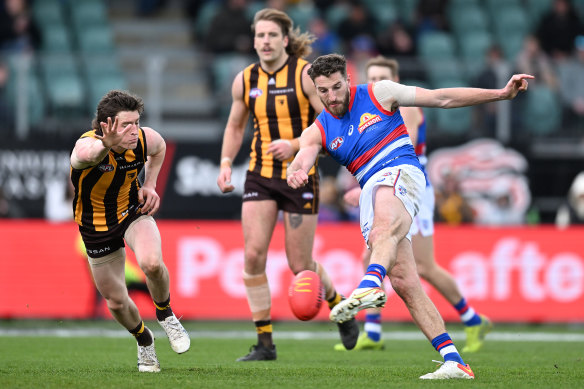 Things weren’t much better inside the Dogs’ other arc. Jack Gunston showcased his sheer class with three first-half goals before finishing with four and Hawthorn were able to make considerable hay from their comparatively limited entries.

The Bulldogs did enough to scrounge their way into a slender lead at the main interval after Cody Weightman goaled with his first touch, 39 seconds before the half-time siren, before the second half was played almost exclusively on their terms.

Dylan Moore goaled inside the opening half-minute of the fourth to trim the margin to four points but Hawthorn had little left in the tank and could only hold the fort for so long and play continued to be on the Bulldogs’ terms.

Their renowned engine room, led on Sunday by Tim English and Josh Dunkley, with cameos from Adam Treloar and Marcus Bontempelli, was superior all afternoon and gradually ground Hawthorn down. 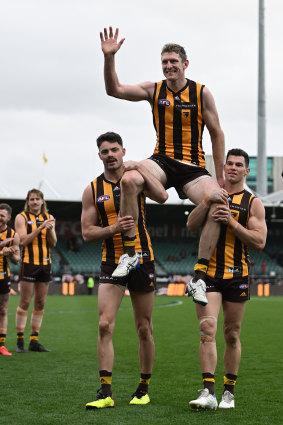 Hawks star Ben McEvoy is chaired from the field after his last game.Credit:Getty Images

BYE BYE BIG BEN
Retiring Hawthorn captain Ben McEvoy, playing his 252nd and last AFL match, got his team off the mark after the Bulldogs registered the opening two majors. The highly respected 33-year-old, who spent more than three months on the sidelines after suffering a broken neck in a horror training accident this year, goaled on the back of a neat handball from debutant Jack Saunders. Late in the second stanza, McEvoy slotted his second major to give the Hawks the lead after outmarking Ed Richards in typical “Big Boy” style.

YOUNGSTERS ON THE BOARD
Sam Darcy closed Hawthorn’s second-quarter lead then erased it altogether with two goals in a minute – his first two in AFL ranks. The son of Bulldogs legend Luke Darcy slotted his first after snaring a powerful mark among a pack of five players. The Dogs then surged forward from the next centre bounce and the chain ended with Darcy outpositioning James Sicily for another strong mark, before he wheeled around and snapped truly with his left foot.
On the very next play, Hawks ruckman Max Lynch secured the centre hit-out and clearance and the ball found its way down the other end. Jaeger O’Meara’s handball out the back landed in the lap of debutant Jack Saunders, who charged in to his maiden AFL goal to put Hawthorn back in front.

Future of unsung Cowboys hero up in the air