A desperate tackle from Zaine Cordy, a classy long goal from Marcus Bontempelli and two brave defensive marks from Tim English has kept the Western Bulldogs' season alive as they entered the top eight following a dramatic two-point win over the Eagles.

Despite dominating after quarter time they could not shake the Eagles until their skipper stood tall with a 50-metre set shot that was ruled a goal despite Jeremy McGovern getting a finger to the ball as it cleared the goal line. 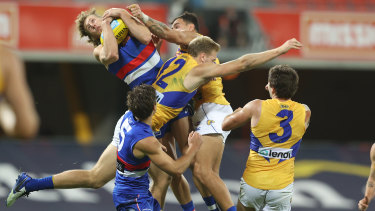 Pick of the pack: Aaron Naughton pulls down a grab for the Bulldogs.Credit:Getty Images

The goal umpire ruled it to be a goal and the score reviewer found there was insufficient evidence to overrule his decision, giving the Bulldogs a lead slimmer than their beanpole ruckman.

A ruck free kick to Jack Darling gave him a chance to win the game for the Eagles but he could not convert and the Bulldogs hung on.

It was a brave win because at quarter time the Bulldogs looked unlikely winners, but they turned the contest around with smart coaching and energy around the contest.

That crisis at the first break led to the Western Bulldogs seizing a tactical opportunity that stares every team that plays West Coast in the face. 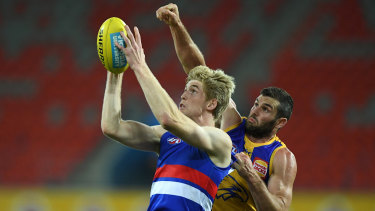 At that point the predictable Eagles had taken six intercept marks, returning every forward foray from the opposition with interest to establish a four-goal lead.

The Bulldogs were in a jam so they considered going underground when they went forward instead of giving Eagles' defenders Jeremy McGovern, Tom Barrass and Brayden Ainsworth the chance to dominate the skies.

But it is one thing to have an idea, it is another thing to execute the plan.

The Bulldogs' midfielders and rebounding defenders Jason Johannisen and Caleb Daniel gained the ascendancy and helped their team win field position with the Eagles restricted to just 11 inside 50s for the half. 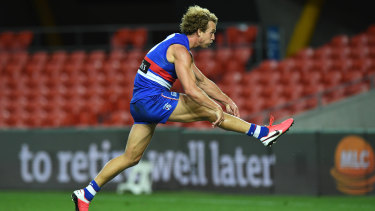 Off the leash: Mitch Wallis boots a goal for the Dogs.Credit:Getty Images

The ball bounced forward in an inebriated manner, lurching one way and the other to greet the Bulldogs forwards with a smile and the Eagles tall defenders didn't know how to react as only inaccuracy kept them from losing the lead by half-time.

At half-time the Eagles weren't as worried about the work of their defenders as the lack of work from their midfielders with the lack of inside 50s a genuine concern for their coach Adam Simpson who wanted to get the ball forward in any fashion.

They had already lost stopper Mark Hutchings to a soft tissue injury having withdrawn champion ruckman Nic Naitanui with back soreness.

And the points looked to be heading to the Bulldogs hub as they dominated around the contest for most of the third quarter but it was the Eagles who kicked the first goal with just two minutes remaining in the term when Dom Sheed cleaned up a comedy routine with an accurate snap.

The Bulldogs hit back with an immediate goal and retained their one point lead when Ryan Gardner smothered a set shot after the siren from the Eagles' Jack Darling.

In the final quarter it became a dogfight but it was moments of individual brilliance from key Bulldogs that saw them fall over the line, winners and grinners.

The premiership Bulldog was missing as his team battled to hold on during the year but he has been a vital presence since returning. 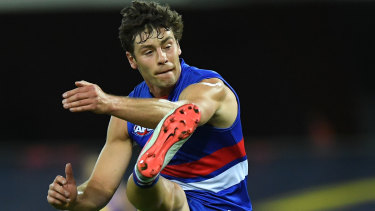 On Sunday, with Nic Naitanui out, Josh Dunkley continued in his controversial role as back-up ruckman to Tim English. But he did not rest solely in the midfield, also playing as a mobile centre half forward, kicking one goal and winning the ball when it hit the turf.

It has not been an issue for the Bulldogs but when the pressure is on at the end of the season and goalscoring chances are hard to find teams can't afford to miss chances. Unfortunately the Bulldogs were inaccurate in front of goal from start to finish ensuring their inside 50 dominance did not translate to the scoreboard. Aaron Naughton set the trend and then could not kick a vital goal late to stretch the lead.