Home » Rugby » Canberra, confidence and a cup of tea: Inside an unlikely Raiders revival

Ricky Stuart can trace a part of his coaching philosophy back to a cup of tea with the late Ron Massey.

It is in part a reason why the Canberra coach’s belief never wavered, even when the Raiders spent five months outside the top eight this season. Nor did it waver when Josh Hodgson’s season ended in six minutes, when a freak accident saw Jarrod Croker go under the knife, or when Stuart himself was hit with a one-game ban for a post-match press conference tirade.

The fact the Raiders enter the final round of the regular season with their finals destiny in their own hands despite being written off and spending all bar three weeks outside the top eight is so perfectly Canberra.

Yet Stuart – and a fan base accustomed to seeing their team play the most ballistic game of the round – will take nothing for granted before meeting the 16th-placed Wests Tigers at Leichhardt Oval on Sunday.

Sitting in the top eight for the first time since round three, a win will likely be enough for Canberra to book a place in the finals unless the ninth-placed Brisbane Broncos – who trail the Raiders by 43 in the points differential stakes – pull off a round-25 miracle against St George Illawarra on Saturday.

How did they get here? With a hooker named Zac Woolford who spent half the year playing NSW Cup games at Henson Park and working in trainer Peter Snowden’s stables, with relentless back-rower Hudson Young, who has won two games off his own bat to put himself on Mal Meninga’s radar for the World Cup. That’s before you even get to Joe Tapine, who may just be the best front-rower in rugby league. 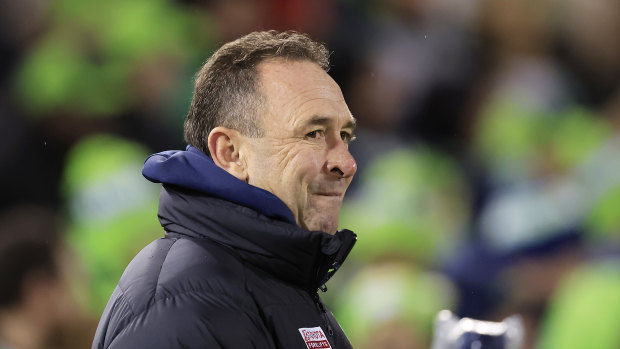 Canberra coach Ricky Stuart is chasing another finals appearance with the Raiders.Credit:Getty

Stuart was always confident the Raiders could turn their season around, even when they fell to 15th with a 2-6 record, or when they needed other results to go their way to climb the ladder. That’s why, as he sat inside Canberra’s Braddon base, he could hear Massey’s words ringing in his ears.

“We were just talking about players one day, and he said ‘Players are like dogs, mate. They can sniff the confidence on their coach but they also sniff the lack of’,” Stuart said, his Raiders now chasing their 12th win from their past 16 starts.

“It was just a comment he made, it wasn’t pointed at me having to show confidence around the team or anything. It was just more of a coaching tip when I was coaching Origin.

“I used to go up to Ronny’s house once or twice a week for a cup of tea. He was a great mate who offered a lot of advice and support. I don’t think people understand, I think people underestimate the importance and the significant contribution he had to Jack Gibson in his successful years.”

Massey was the right-hand man to Gibson, a man widely regarded as one of the greatest rugby league masterminds of all time. Gibson coached Eastern Suburbs to two titles before orchestrating Parramatta’s iconic three-peat with Massey by his side.

Stuart won three premierships as a player in Canberra, but the chance to do it as a coach is what drives him 20 years after steering the Sydney Roosters to the ultimate prize.

The Raiders believe he will be their man. It’s why Canberra chief executive Don Furner and late chairman Allan Hawke backed Stuart in with a new deal until the end of 2025.

Stuart’s new deal was Hawke’s final act in 20 years on Canberra’s board before he lost his battle to cancer on Wednesday night. If ever the Raiders needed more motivation to secure a finals berth, there it is.

An eighth-placed finish would set the Raiders up for a sudden-death elimination final clash with the Melbourne Storm.

A trip to Melbourne would hold little concern for the Raiders. They boast seven wins at AAMI Park – the only club with more victories there is the Storm – and they have won four on the trot in the Victorian capital.

While the Raiders are on the park determined to prove they “belong” in the finals, Stuart will be on the sideline riding every moment. Even with a television camera pointed squarely in his direction, the coach will unload with every cheer, every grimace, every torn calf suffered during a jump for joy.

Is Ireland vs England on TV today? Kick-off time, channel and how to watch Six Nations fixture

Sea Eagles within reach of top four after taming Tigers