As the clubhouse leader in the Coleman Medal race and the game’s most spectacular key forward this year, Charlie Curnow has vastly exceeded market forecasts in his return from more than two years of knee injuries.

Harry McKay flourished in Curnow’s absence in 2021, to the point that McKay became a blue-chip key forward for the first time, winning the Coleman Medal and signing a two-year contract extension.

In 2023, Curnow and McKay – a key forward tandem who represent Carlton’s point of difference from every club, bar Geelong – will enter the season as restricted free agents.

Assuming neither of the pair signs a contract later this year, Carlton will face the challenge of securing both key forwards in the face of monstrous offers from rivals, such as a cashed-up Essendon.

If this is a nice problem in the sense that the Blues possess two high-calibre, tall forwards when several clubs don’t have one, it is also a critical moment for a club that appears well-positioned to contend for premierships from 2023.

In the decade-long history of free agency, this shapes as probably the first occasion when a club has two free agents attracting offers of more than $1 million each in the same year. West Coast went close in 2018, when Jeremy McGovern and Andrew Gaff were both free agents (McGovern got about $5 million over five years, while Gaff spurned a massive North offer). 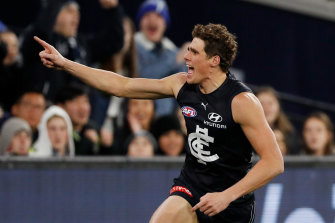 Charlie Curnow has cemented his standing since his return.Credit:AFL Photos

The outcome of Carlton’s negotiations with Curnow and McKay will be important because the Blues are already carrying hefty contracts for Patrick Cripps (five more years), Sam Walsh (three to go), Jacob Weitering, as well as the extravagant deals that secured both Zac Williams ($700,000-plus) and Mitch McGovern (one year left on an estimated $800,000). Adam Saad, too, didn’t cross from the Bombers on a Dimmey’s deal.

The Blues will wish to avoid the fate of their Sunday opponents, Greater Western Sydney, who’ve been severely hamstrung – and are expected to shed multiple quality players again this October – by the six-year-plus deals handed out to Stephen Coniglio, Josh Kelly, Lachie Whitfield and Toby Greene, all signed on around or within a drop punt of $1 million a season.

What would Curnow and McKay attract? A rival club’s list manager said he would pay Curnow more, despite his history of wounded knees. “Curnow could get more than $1 million a year for six years. In fact, they both could because it depends on how desperate a club gets. If Essendon still have a pile of cash next year, they will offer whatever it takes.”

North have space aplenty, too, as do the Crows. Hawthorn and doubtless others would be willing to offload or retire players to get one of Charlie and Harry, whose share price will be inflated by the scarcity of key forwards. In a market in which Daniel McStay can get up to $600,000 for five years, what’s the younger Curnow worth?

Having splurged on Williams and Saad in 2020 and then acquired Adam Cerra and George Hewett on cheaper rates last October, the Blues expect to be heading back to the draft and focused on retention, eschewing their natural predatory ways. 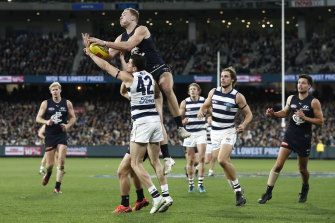 Curnow is already paid about $800,000 and McKay is in that postcode, too. The Blues, thus, would be banking on not forking out huge raises.

Old Carlton of more than two decades ago would have solved any salary-cap conundrums via what one might term “undisclosed” payments. Since this has not been a Carlton solution for quite a while, something – or someone – has gotta give.

Players will either give up dollars, or give up being Carlton players.

The Blues will likely need to offer both key forwards at least six-year terms, having done so for Cripps and Williams. Key forwards aren’t as easily found as midfielders or half-back flankers.

The Giants lost Cameron to Geelong and haven’t recovered. They are one cautionary tale, Collingwood are another.

Less than three years have passed since the Pies affirmed that Darcy Moore, Jordan De Goey and Brodie Grundy were the club’s priority signings.

Unfortunately, Collingwood were already burdened with a bunch of excessive contracts – including Adam Treloar’s back-loaded deal – when they signed Grundy to a seven-year deal worth $6.5 million.

Today, the Pies are weighing up whether Grundy can be traded – which would necessitate paying a portion of the five years left, while De Goey’s contract offer has been pulled, and he will be courting offers in his free agent season. Of their priorities of 2019-20, only Moore is certain to remain in 2023.

It has taken until now, after the firesale of 2020 and a precipitous fall, for the Magpies to regain their footing following their self-inflicted trauma.

If those are unpleasant outcomes for Carlton to avoid, there’s one worth emulating – the club that their new chief executive, Brian Cook, ran for 23 years.

Geelong’s capacity to keep players, and to keep refreshing and filling holes like the magic pudding, has been predicated on the Cats’ disciplined approach to contracting and the willingness of players, headed by Tom Hawkins (surely worth a million over the past five seasons) to take what they need, rather than take what they can.