Geelong has placed the ball squarely in the AFL's court over the prospect of a Cats-Collingwood final being marred by a uniform clash for the second straight year.

The Pies' elimination final win over West Coast on Saturday night, coupled with the Geelong's qualifying final loss to Port Adelaide on Thursday night, means the Pies and the Cats will meet in the finals for the second straight year. 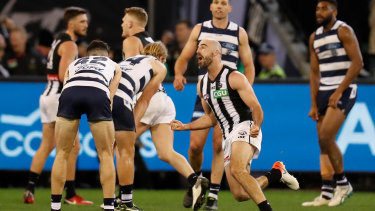 Clash: The Cats and Pies were a mish-mash of colours in last year’s finals series.Credit:Getty

Just as was the case in last year's qualifying final – won by Collingwood – Geelong is the higher-ranked team.

Following the game, Collingwood president Eddie McGuire said the clash had been "ridiculous" and accused Geelong of reneging on a longstanding “gentleman’s agreement” with former Cats president Frank Costa for the Cats to always wear white shorts against Collingwood.

McGuire said the agreement had come into place sometime before Collingwood changed its jumper from predominantly white to predominantly black in 2001. 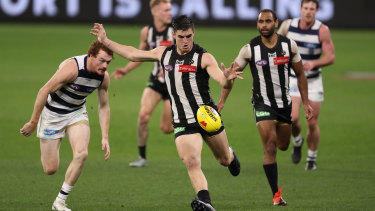 Geelong president Colin Carter said at the time that he was not aware of any such agreement.

Earlier this year Geelong wore white shorts despite the Cats being the "home team" in their meeting with Collingwood, who wore black shorts.

Asked on Sunday about the potential for another clash, Carter said Geelong would allow the league to dictate terms.

"We are happy to wear what the AFL directs us to wear – as the higher ranked club in this final," Carter said.

McGuire has been no stranger to jumper dramas, getting embroiled in a war of words earlier this year with Port Adelaide chairman David Koch over whether Port had agreed not to wear their black and white "prison bar" jumper in the AFL.

Asked about the prospect of a Richmond-Adelaide jumper clash in the 2017 grand final, AFL chief Gillon McLachlan told Fox Footy at the time that home teams did not exist in grand finals, but wasn't as clear on lead-up finals.

McLachlan flagged the prospect of a coin toss for the right to wear a home jumper. Richmond ultimately broke their 37-year flag drought wearing their yellow clash jumper.