Home » Rugby » Chance Bateman: Respect the Riolis, and learn from their experience

Hawthorn premiership player Chance Bateman says it is vital for his former club and the football community to acknowledge and respect the reasons behind former teammate Cyril Rioli and partner Shannyn Ah Sam-Rioli’s decision to end their association with the Hawks in 2018.

The pair outlined the experiences that revealed a lack of cultural awareness within the club and led to Rioli exiting the game and return to the Northern Territory aged 28 with the champion forward saying: “I wouldn’t go back to Hawthorn after what’s gone on.”

Bateman, who played alongside Rioli in the 2008 premiership and was the first Indigenous person to play 100 games at the Hawks, said he felt heartbroken for Cyril and Shannyn and was saddened when he read of their experiences. 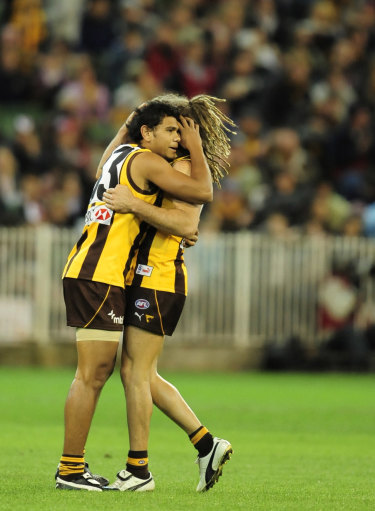 “If that is the way Cyril feels, and Shannyn as well, it is important that we acknowledge those feelings and respect them because that is how they feel about their experience throughout that time,” Bateman said.

“It is really important that their feelings and thoughts aren’t dismissed or played down.”

Bateman, a Noongar man of Ballardong country, said that unless that was done, there was a risk the club and the football community would not do the work required to learn from such experiences.

Rioli played in four Hawthorn flags, won the 2015 Norm Smith medal and is regarded as one of the most exciting players to ever play the game kicking 275 goals in 189 games.

Bateman, who is now an Indigenous liaison officer at West Coast, said the 32-year-old was a critical reason why Hawthorn experienced a golden era under Alastair Clarkson’s coaching with premierships in 2008, 2013, 2014 and 2015.

He said the pair’s experiences was another reminder about how much work remained to address the issues within football clubs and the wider community to make environments culturally safe.

“It doesn’t matter what industry you are in, whether it be the AFL, AFL footy club or any sort of corporate organisation the journey for reconciliation is ongoing and never ending,” Bateman said.

“It’s not just Hawthorn and not just the AFL but a lot of the time we can give ourselves a bit of a pat on the back for all the great stuff we are doing without actually knowing there is some of this stuff rumbling in the background.”

Bateman’s arrival at the Hawks via pick 48 at the 1999 national draft ended what the Hawks Reconciliation Action Plan admits was “the club’s resistance to recruiting Aboriginal and Torres Strait Islander players” throughout the 1970s, ’80s and ’90s.

The Hawks spoke to Burgoyne soon after Rioli aired his experiences and their current Indigenous players on Friday to gauge their feelings about the current environment with it now compulsory for clubs to employ Indigenous liaison officers.

Hawthorn are not yet considering pursuing a similar path to Collingwood, which commissioned the Do Better report to address historical issues of racism within the club.

The report was leaked early last year after it was presented to the board in December 2020. The report’s authors evaluated the progress of the recommendations in recent months and said the “ambitions of Collingwood in this space will be greatly enhanced by the support of other clubs and by the AFL”.

After preparing for the Games in the garage, Tokyo looms for Aussie teen sport climber